Insider Monkey has processed numerous 13F filings of hedge funds and famous investors to create an extensive database of hedge fund holdings. The 13F filings show the hedge funds’ and investors’ positions as of the end of the fourth quarter. You can find write-ups about an individual hedge fund’s trades on numerous financial news websites. However, in this article we will take a look at their collective moves and analyze what the smart money thinks of Itron, Inc. (NASDAQ:ITRI) based on that data.

Is Itron, Inc. (NASDAQ:ITRI) going to take off soon? Investors who are in the know are in a bearish mood. The number of long hedge fund positions retreated by 3 lately. Our calculations also showed that itri isn’t among the 30 most popular stocks among hedge funds. ITRI was in 14 hedge funds’ portfolios at the end of the fourth quarter of 2018. There were 17 hedge funds in our database with ITRI holdings at the end of the previous quarter.

What have hedge funds been doing with Itron, Inc. (NASDAQ:ITRI)? 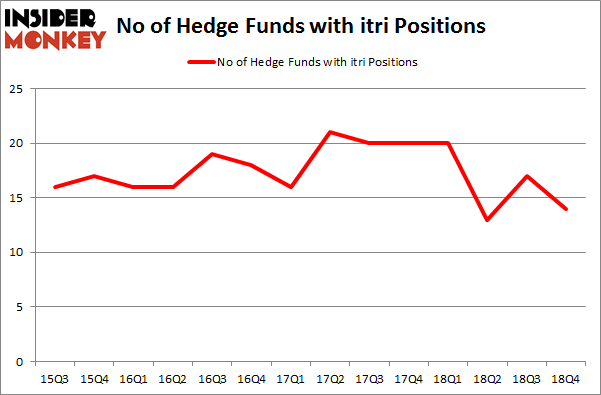 The largest stake in Itron, Inc. (NASDAQ:ITRI) was held by Scopia Capital, which reported holding $240.5 million worth of stock at the end of September. It was followed by Impax Asset Management with a $118.9 million position. Other investors bullish on the company included Marcato Capital Management, Cardinal Capital, and Renaissance Technologies.

Judging by the fact that Itron, Inc. (NASDAQ:ITRI) has witnessed declining sentiment from hedge fund managers, it’s easy to see that there is a sect of hedgies that decided to sell off their positions entirely in the third quarter. Interestingly, Michael Platt and William Reeves’s BlueCrest Capital Mgmt. dropped the largest position of the 700 funds watched by Insider Monkey, valued at about $1.1 million in stock. Dmitry Balyasny’s fund, Balyasny Asset Management, also cut its stock, about $0.6 million worth. These moves are intriguing to say the least, as total hedge fund interest dropped by 3 funds in the third quarter.

As you can see these stocks had an average of 6.5 hedge funds with bullish positions and the average amount invested in these stocks was $26 million. That figure was $449 million in ITRI’s case. Hamilton Lane Incorporated (NASDAQ:HLNE) is the most popular stock in this table. On the other hand Grupo Aeroportuario del Centro Norte, S. A. B. de C. V. (NASDAQ:OMAB) is the least popular one with only 5 bullish hedge fund positions. Compared to these stocks Itron, Inc. (NASDAQ:ITRI) is more popular among hedge funds. Our calculations showed that top 15 most popular stocks) among hedge funds returned 24.2% through April 22nd and outperformed the S&P 500 ETF (SPY) by more than 7 percentage points. Unfortunately ITRI wasn’t nearly as popular as these 15 stock and hedge funds that were betting on ITRI were disappointed as the stock returned 4.9% and underperformed the market. If you are interested in investing in large cap stocks with huge upside potential, you should check out the top 15 most popular stocks) among hedge funds as 13 of these stocks already outperformed the market this year.