Is istar Inc (STAR) A Good Stock To Buy?

Is istar Inc (NYSE:STAR) a good bet right now? We like to analyze hedge fund sentiment before conducting days of in-depth research. We do so because hedge funds and other elite investors have numerous Ivy League graduates, expert network advisers, and supply chain tipsters working or consulting for them. There is not a shortage of news stories covering failed hedge fund investments and it is a fact that hedge funds’ picks don’t beat the market 100% of the time, but their consensus picks have historically done very well and have outperformed the market after adjusting for risk.

istar Inc (NYSE:STAR) has experienced a decrease in hedge fund interest recently. STAR was in 5 hedge funds’ portfolios at the end of June. There were 9 hedge funds in our database with STAR holdings at the end of the previous quarter. Our calculations also showed that STAR isn’t among the 30 most popular stocks among hedge funds (see the video below).

According to most shareholders, hedge funds are seen as unimportant, outdated financial vehicles of the past. While there are greater than 8000 funds trading at present, We look at the bigwigs of this group, around 750 funds. These money managers shepherd most of the smart money’s total asset base, and by paying attention to their best equity investments, Insider Monkey has found various investment strategies that have historically exceeded the broader indices. Insider Monkey’s flagship hedge fund strategy outperformed the S&P 500 index by around 5 percentage points annually since its inception in May 2014. We were able to generate large returns even by identifying short candidates. Our portfolio of short stocks lost 25.7% since February 2017 (through September 30th) even though the market was up more than 33% during the same period. We just shared a list of 10 short targets in our latest quarterly update . 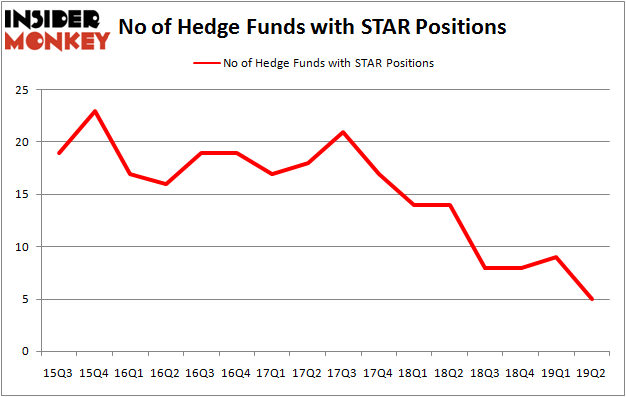 Of the funds tracked by Insider Monkey, Diamond Hill Capital, managed by Ric Dillon, holds the biggest position in istar Inc (NYSE:STAR). Diamond Hill Capital has a $50.8 million position in the stock, comprising 0.3% of its 13F portfolio. Sitting at the No. 2 spot is Millennium Management, led by Israel Englander, holding a $9.3 million position; less than 0.1%% of its 13F portfolio is allocated to the company. Other hedge funds and institutional investors that are bullish consist of Ken Griffin’s Citadel Investment Group, Renaissance Technologies and Matthew Hulsizer’s PEAK6 Capital Management.

Judging by the fact that istar Inc (NYSE:STAR) has witnessed bearish sentiment from the entirety of the hedge funds we track, it’s easy to see that there were a few hedgies who sold off their full holdings in the second quarter. It’s worth mentioning that Dmitry Balyasny’s Balyasny Asset Management sold off the biggest position of all the hedgies watched by Insider Monkey, totaling an estimated $2.5 million in stock. Glenn Russell Dubin’s fund, Highbridge Capital Management, also dumped its stock, about $2.3 million worth. These moves are interesting, as aggregate hedge fund interest dropped by 4 funds in the second quarter.

As you can see these stocks had an average of 6.5 hedge funds with bullish positions and the average amount invested in these stocks was $18 million. That figure was $67 million in STAR’s case. German American Bancorp., Inc. (NASDAQ:GABC) is the most popular stock in this table. On the other hand Stock Yards Bancorp, Inc. (NASDAQ:SYBT) is the least popular one with only 6 bullish hedge fund positions. Compared to these stocks istar Inc (NYSE:STAR) is even less popular than SYBT. Hedge funds clearly dropped the ball on STAR as the stock delivered strong returns, though hedge funds’ consensus picks still generated respectable returns. Our calculations showed that top 20 most popular stocks among hedge funds returned 24.4% in 2019 through September 30th and outperformed the S&P 500 ETF (SPY) by 4 percentage points. A small number of hedge funds were also right about betting on STAR as the stock returned 5.9% during the third quarter and outperformed the market by an even larger margin.