The latest 13F reporting period has come and gone, and Insider Monkey is again at the forefront when it comes to making use of this gold mine of data. We have processed the filings of the more than 700 world-class investment firms that we track and now have access to the collective wisdom contained in these filings, which are based on their June 28 holdings, data that is available nowhere else. Should you consider Israel Chemicals Ltd. (NYSE:ICL) for your portfolio? We’ll look to this invaluable collective wisdom for the answer.

Is Israel Chemicals Ltd. (NYSE:ICL) worth your attention right now? Hedge funds are in an optimistic mood. The number of long hedge fund bets increased by 2 in recent months. Our calculations also showed that ICL isn’t among the 30 most popular stocks among hedge funds (view the video below).

At the end of the second quarter, a total of 6 of the hedge funds tracked by Insider Monkey were long this stock, a change of 50% from the first quarter of 2019. The graph below displays the number of hedge funds with bullish position in ICL over the last 16 quarters. With the smart money’s sentiment swirling, there exists a few noteworthy hedge fund managers who were boosting their holdings substantially (or already accumulated large positions). 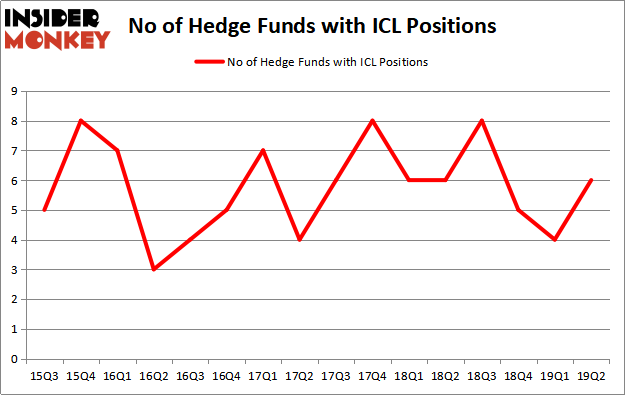 More specifically, Arrowstreet Capital was the largest shareholder of Israel Chemicals Ltd. (NYSE:ICL), with a stake worth $30.5 million reported as of the end of March. Trailing Arrowstreet Capital was Renaissance Technologies, which amassed a stake valued at $5.1 million. Millennium Management, Citadel Investment Group, and Two Sigma Advisors were also very fond of the stock, giving the stock large weights in their portfolios.

As one would reasonably expect, some big names have been driving this bullishness. Millennium Management, managed by Israel Englander, assembled the most valuable position in Israel Chemicals Ltd. (NYSE:ICL). Millennium Management had $1 million invested in the company at the end of the quarter. Ken Griffin’s Citadel Investment Group also made a $0.2 million investment in the stock during the quarter.

Let’s check out hedge fund activity in other stocks – not necessarily in the same industry as Israel Chemicals Ltd. (NYSE:ICL) but similarly valued. We will take a look at ANGI Homeservices Inc. (NASDAQ:ANGI), GCI Liberty, Inc. (NASDAQ:GLIBA), Tripadvisor Inc (NASDAQ:TRIP), and Ciena Corporation (NYSE:CIEN). All of these stocks’ market caps are similar to ICL’s market cap.

As you can see these stocks had an average of 30 hedge funds with bullish positions and the average amount invested in these stocks was $1002 million. That figure was $37 million in ICL’s case. GCI Liberty, Inc. (NASDAQ:GLIBA) is the most popular stock in this table. On the other hand ANGI Homeservices Inc. (NASDAQ:ANGI) is the least popular one with only 20 bullish hedge fund positions. Compared to these stocks Israel Chemicals Ltd. (NYSE:ICL) is even less popular than ANGI. Hedge funds dodged a bullet by taking a bearish stance towards ICL. Our calculations showed that the top 20 most popular hedge fund stocks returned 24.4% in 2019 through September 30th and outperformed the S&P 500 ETF (SPY) by 4 percentage points. Unfortunately ICL wasn’t nearly as popular as these 20 stocks (hedge fund sentiment was very bearish); ICL investors were disappointed as the stock returned -1.2% during the third quarter and underperformed the market. If you are interested in investing in large cap stocks with huge upside potential, you should check out the top 20 most popular stocks among hedge funds as many of these stocks already outperformed the market so far in 2019.

Here is What Hedge Funds Think About Alcoa Corporation (AA)
Monthly Newsletter Strategy
Download a free copy of our newsletter and see the details inside!
Hedge Fund Resource Center
Related News
Is Israel Chemicals Ltd. (ICL) A Good Stock To Buy? 11 Largest Auto Insurance Companies In The US In 2019 10 Poorest Cities in America in 2019 8 Lowest Tar and Nicotine Cigarette Brands in 2019
Billionaire Hedge Funds