Many investors, including Carl Icahn or Stan Druckenmiller, have been saying for a while now that Trump presidency will be good for publicly traded stocks (at least in the very short term) due to lower taxes and higher GDP growth rates. Both investors profited handsomely from this analysis during the 5 hours immediately following Donald Trump’s election victory. The markets, especially small-cap stocks, kept rallying in the following three weeks. Nevertheless, there are still opportunities in individual stocks and we believe the stocks with strong hedge fund bullish stance are a good place to look for investment ideas. In this article we will find out how hedge fund sentiment to iShares MSCI ACWI ETF (NASDAQ:ACWI) changed recently.

iShares MSCI ACWI ETF (NASDAQ:ACWI) has experienced an increase in hedge fund sentiment of late. ACWI was in 9 hedge funds’ portfolios at the end of September. There were 6 hedge funds in our database with ACWI positions at the end of the previous quarter. At the end of this article we will also compare ACWI to other stocks including Sonoco Products Company (NYSE:SON), East West Bancorp, Inc. (NASDAQ:EWBC), and Brown & Brown, Inc. (NYSE:BRO) to get a better sense of its popularity.

What have hedge funds been doing with iShares MSCI ACWI ETF (NASDAQ:ACWI)?

Heading into the fourth quarter of 2016, a total of 9 of the hedge funds tracked by Insider Monkey were bullish on this stock, up by 50% from the previous quarter. On the other hand, there were a total of 6 hedge funds with a bullish position in ACWI at the beginning of this year. With hedge funds’ sentiment swirling, there exists an “upper tier” of key hedge fund managers who were increasing their stakes significantly (or already accumulated large positions). 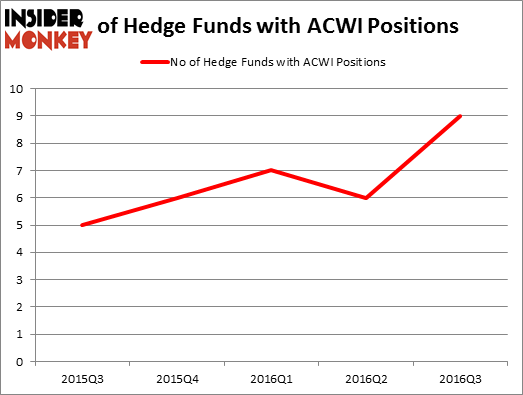 According to Insider Monkey’s hedge fund database, William von Mueffling’s Cantillon Capital Management has the biggest position in iShares MSCI ACWI Index Fund (NASDAQ:ACWI), worth close to $107.7 million, comprising 1.5% of its total 13F portfolio. The second largest stake is held by Daniel Arbess of Perella Weinberg Partners, with a $49.8 million position; the fund has 14.5% of its 13F portfolio invested in the stock. Remaining peers that hold long positions include Jim Chanos’ Kynikos, Ken Fisher’s Fisher Asset Management and Israel Englander’s Millennium Management which is one of the 10 largest hedge funds in the world. We should note that none of these hedge funds are among our list of the 100 best performing hedge funds which is based on the performance of their 13F long positions in non-microcap stocks.