Out of thousands of stocks that are currently traded on the market, it is difficult to identify those that will really generate strong returns. Hedge funds and institutional investors spend millions of dollars on analysts with MBAs and PhDs, who are industry experts and well connected to other industry and media insiders on top of that. Individual investors can piggyback the hedge funds employing these talents and can benefit from their vast resources and knowledge in that way. We analyze quarterly 13F filings of nearly 750 hedge funds and, by looking at the smart money sentiment that surrounds a stock, we can determine whether it has the potential to beat the market over the long-term. Therefore, let’s take a closer look at what smart money thinks about InVitae Corporation (NYSE:NVTA).

InVitae Corporation (NYSE:NVTA) was in 16 hedge funds’ portfolios at the end of the second quarter of 2019. NVTA shareholders have witnessed a decrease in hedge fund interest in recent months. There were 28 hedge funds in our database with NVTA holdings at the end of the previous quarter. Our calculations also showed that NVTA isn’t among the 30 most popular stocks among hedge funds (see the video below).

What does smart money think about InVitae Corporation (NYSE:NVTA)?

Heading into the third quarter of 2019, a total of 16 of the hedge funds tracked by Insider Monkey were bullish on this stock, a change of -43% from one quarter earlier. Below, you can check out the change in hedge fund sentiment towards NVTA over the last 16 quarters. So, let’s review which hedge funds were among the top holders of the stock and which hedge funds were making big moves. 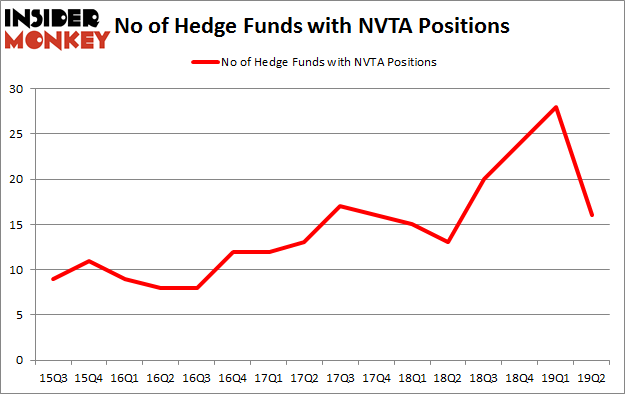 More specifically, Baker Bros. Advisors was the largest shareholder of InVitae Corporation (NYSE:NVTA), with a stake worth $91.7 million reported as of the end of March. Trailing Baker Bros. Advisors was Casdin Capital, which amassed a stake valued at $90.2 million. Perceptive Advisors, Rock Springs Capital Management, and Deerfield Management were also very fond of the stock, giving the stock large weights in their portfolios.

Since InVitae Corporation (NYSE:NVTA) has experienced declining sentiment from hedge fund managers, logic holds that there lies a certain “tier” of hedgies that slashed their positions entirely by the end of the second quarter. Intriguingly, James A. Silverman’s Opaleye Management cut the biggest position of the 750 funds tracked by Insider Monkey, totaling about $10.3 million in stock, and Samuel Isaly’s OrbiMed Advisors was right behind this move, as the fund dropped about $5.2 million worth. These bearish behaviors are important to note, as total hedge fund interest dropped by 12 funds by the end of the second quarter.

As you can see these stocks had an average of 18.5 hedge funds with bullish positions and the average amount invested in these stocks was $194 million. That figure was $329 million in NVTA’s case. Patterson Companies, Inc. (NASDAQ:PDCO) is the most popular stock in this table. On the other hand Terex Corporation (NYSE:TEX) is the least popular one with only 15 bullish hedge fund positions. InVitae Corporation (NYSE:NVTA) is not the least popular stock in this group but hedge fund interest is still below average. This is a slightly negative signal and we’d rather spend our time researching stocks that hedge funds are piling on. Our calculations showed that top 20 most popular stocks among hedge funds returned 24.4% in 2019 through September 30th and outperformed the S&P 500 ETF (SPY) by 4 percentage points. Unfortunately NVTA wasn’t nearly as popular as these 20 stocks (hedge fund sentiment was quite bearish); NVTA investors were disappointed as the stock returned -18% during the third quarter and underperformed the market. If you are interested in investing in large cap stocks with huge upside potential, you should check out the top 20 most popular stocks among hedge funds as many of these stocks already outperformed the market so far in 2019.