Is InterDigital, Inc. (IDCC) A Good Stock To Buy?

We are still in an overall bull market and many stocks that smart money investors were piling into surged through October 17th. Among them, Facebook and Microsoft ranked among the top 3 picks and these stocks gained 45% and 39% respectively. Hedge funds’ top 3 stock picks returned 34.4% this year and beat the S&P 500 ETFs by 13 percentage points. Investing in index funds guarantees you average returns, not superior returns. We are looking to generate superior returns for our readers. That’s why we believe it isn’t a waste of time to check out hedge fund sentiment before you invest in a stock like InterDigital, Inc. (NASDAQ:IDCC).

InterDigital, Inc. (NASDAQ:IDCC) shares haven’t seen a lot of action during the second quarter. Overall, hedge fund sentiment was unchanged. The stock was in 16 hedge funds’ portfolios at the end of the second quarter of 2019. At the end of this article we will also compare IDCC to other stocks including Euronav NV (NYSE:EURN), Myriad Genetics, Inc. (NASDAQ:MYGN), and M.D.C. Holdings, Inc. (NYSE:MDC) to get a better sense of its popularity. Our calculations also showed that IDCC isn’t among the 30 most popular stocks among hedge funds (view the video below).

How have hedgies been trading InterDigital, Inc. (NASDAQ:IDCC)?

At the end of the second quarter, a total of 16 of the hedge funds tracked by Insider Monkey were bullish on this stock, a change of 0% from the previous quarter. Below, you can check out the change in hedge fund sentiment towards IDCC over the last 16 quarters. With the smart money’s capital changing hands, there exists an “upper tier” of key hedge fund managers who were adding to their holdings considerably (or already accumulated large positions). 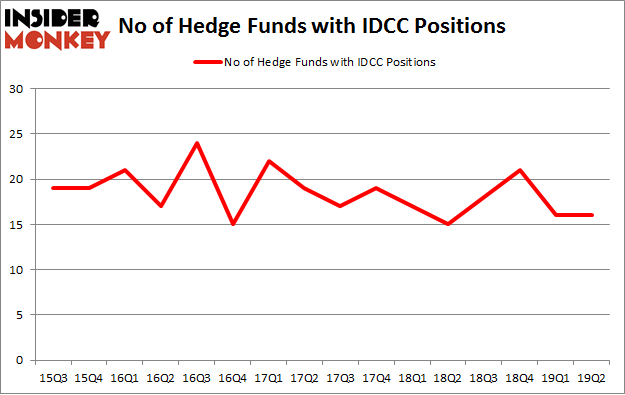 More specifically, Renaissance Technologies was the largest shareholder of InterDigital, Inc. (NASDAQ:IDCC), with a stake worth $79.7 million reported as of the end of March. Trailing Renaissance Technologies was D E Shaw, which amassed a stake valued at $55.8 million. Shannon River Fund Management, Millennium Management, and Two Sigma Advisors were also very fond of the stock, giving the stock large weights in their portfolios.

Due to the fact that InterDigital, Inc. (NASDAQ:IDCC) has faced falling interest from the aggregate hedge fund industry, it’s easy to see that there exists a select few hedge funds that slashed their full holdings by the end of the second quarter. It’s worth mentioning that Michael Johnston’s Steelhead Partners cut the biggest stake of the 750 funds watched by Insider Monkey, worth close to $39.3 million in stock, and Glenn Russell Dubin’s Highbridge Capital Management was right behind this move, as the fund cut about $21 million worth. These transactions are interesting, as aggregate hedge fund interest stayed the same (this is a bearish signal in our experience).

As you can see these stocks had an average of 18 hedge funds with bullish positions and the average amount invested in these stocks was $164 million. That figure was $224 million in IDCC’s case. ProPetro Holding Corp. (NYSE:PUMP) is the most popular stock in this table. On the other hand Myriad Genetics, Inc. (NASDAQ:MYGN) is the least popular one with only 15 bullish hedge fund positions. InterDigital, Inc. (NASDAQ:IDCC) is not the least popular stock in this group but hedge fund interest is still below average. This is a slightly negative signal and we’d rather spend our time researching stocks that hedge funds are piling on. Our calculations showed that top 20 most popular stocks among hedge funds returned 24.4% in 2019 through September 30th and outperformed the S&P 500 ETF (SPY) by 4 percentage points. Unfortunately IDCC wasn’t nearly as popular as these 20 stocks (hedge fund sentiment was quite bearish); IDCC investors were disappointed as the stock returned -18.1% during the third quarter and underperformed the market. If you are interested in investing in large cap stocks with huge upside potential, you should check out the top 20 most popular stocks among hedge funds as many of these stocks already outperformed the market so far in 2019.