Is Intercontinental Exchange Inc (ICE) A Good Stock To Buy?

Is Intercontinental Exchange Inc (NYSE:ICE) a good investment now? Hedge funds are becoming more confident. The number of long hedge fund bets moved up by 3 lately. Our calculations also showed that ICE isn’t among the 30 most popular stocks among hedge funds. ICE was in 36 hedge funds’ portfolios at the end of September. There were 33 hedge funds in our database with ICE positions at the end of the previous quarter.

What have hedge funds been doing with Intercontinental Exchange Inc (NYSE:ICE)? 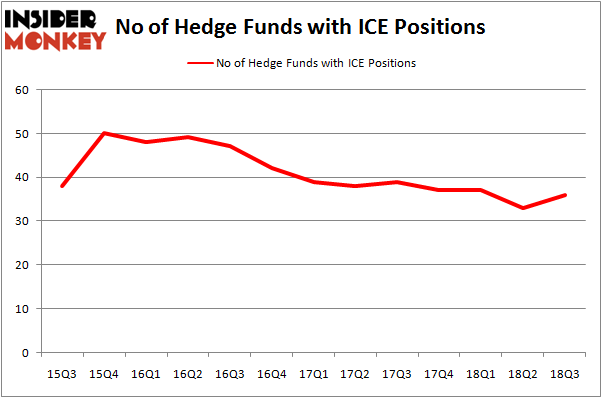 More specifically, Eminence Capital was the largest shareholder of Intercontinental Exchange Inc (NYSE:ICE), with a stake worth $363.3 million reported as of the end of September. Trailing Eminence Capital was Cantillon Capital Management, which amassed a stake valued at $348.3 million. Cantillon Capital Management, Iridian Asset Management, and Senator Investment Group were also very fond of the stock, giving the stock large weights in their portfolios.

As you can see these stocks had an average of 27.75 hedge funds with bullish positions and the average amount invested in these stocks was $898 million. That figure was $2.850 billion in ICE’s case. The Sherwin-Williams Company (NYSE:SHW) is the most popular stock in this table. On the other hand Koninklijke Philips NV (NYSE:PHG) is the least popular one with only 15 bullish hedge fund positions. Intercontinental Exchange Inc (NYSE:ICE) is not the most popular stock in this group but hedge fund interest is still above average. This is a slightly positive signal but we’d rather spend our time researching stocks that hedge funds are piling on. In this regard SHW might be a better candidate to consider a long position.