A whopping number of 13F filings filed with U.S. Securities and Exchange Commission has been processed by Insider Monkey so that individual investors can look at the overall hedge fund sentiment towards the stocks included in their watchlists. These freshly-submitted public filings disclose money managers’ equity positions as of the end of the three-month period that ended June 28, so let’s proceed with the discussion of the hedge fund sentiment on Intelsat S.A. (NYSE:I).

Intelsat S.A. (NYSE:I) shareholders have witnessed a decrease in hedge fund sentiment lately. I was in 42 hedge funds’ portfolios at the end of the second quarter of 2019. There were 54 hedge funds in our database with I positions at the end of the previous quarter. Our calculations also showed that I isn’t among the 30 most popular stocks among hedge funds (see the video below).

What does smart money think about Intelsat S.A. (NYSE:I)?

Heading into the third quarter of 2019, a total of 42 of the hedge funds tracked by Insider Monkey were long this stock, a change of -22% from one quarter earlier. Below, you can check out the change in hedge fund sentiment towards I over the last 16 quarters. With hedgies’ positions undergoing their usual ebb and flow, there exists a select group of notable hedge fund managers who were boosting their stakes substantially (or already accumulated large positions). 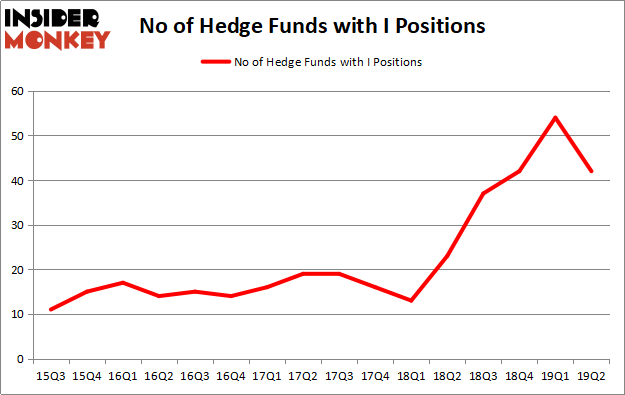 Of the funds tracked by Insider Monkey, Jim Davidson, Dave Roux and Glenn Hutchins’s Silver Lake Partners has the largest position in Intelsat S.A. (NYSE:I), worth close to $231.4 million, corresponding to 5.7% of its total 13F portfolio. Sitting at the No. 2 spot is Rob Citrone of Discovery Capital Management, with a $114.9 million position; 11% of its 13F portfolio is allocated to the company. Remaining members of the smart money with similar optimism consist of Zach Schreiber’s Point State Capital, Ken Griffin’s Citadel Investment Group and Sahm Adrangi’s Kerrisdale Capital.

Judging by the fact that Intelsat S.A. (NYSE:I) has witnessed declining sentiment from the aggregate hedge fund industry, logic holds that there were a few fund managers who sold off their positions entirely heading into Q3. Interestingly, Carl Tiedemann and Michael Tiedemann’s TIG Advisors dumped the largest investment of all the hedgies monitored by Insider Monkey, totaling about $31.6 million in stock. Jacob Doft’s fund, Highline Capital Management, also dumped its stock, about $12.1 million worth. These bearish behaviors are important to note, as aggregate hedge fund interest was cut by 12 funds heading into Q3.

As you can see these stocks had an average of 15.75 hedge funds with bullish positions and the average amount invested in these stocks was $281 million. That figure was $840 million in I’s case. Valmont Industries, Inc. (NYSE:VMI) is the most popular stock in this table. On the other hand Cimpress NV (NASDAQ:CMPR) is the least popular one with only 12 bullish hedge fund positions. Compared to these stocks Intelsat S.A. (NYSE:I) is more popular among hedge funds. Our calculations showed that top 20 most popular stocks among hedge funds returned 24.4% in 2019 through September 30th and outperformed the S&P 500 ETF (SPY) by 4 percentage points. Hedge funds were also right about betting on I as the stock returned 17.2% during Q3 and outperformed the market by an even larger margin. Hedge funds were clearly right about piling into this stock relative to other stocks with similar market capitalizations.

Were Hedge Funds Right About Snapping Up Nordstrom, Inc. (JWN)?
Monthly Newsletter Strategy
Download a free copy of our newsletter and see the details inside!
Hedge Fund Resource Center
Related News
Hedge Funds Have Never Been This Bullish On Intelsat S.A. (I) Here’s What Hedge Funds Think About Intelsat S.A. (I) 5 Ways The Smart Money is Playing the Billion Dollar Satellite Internet Trend Kerrisdale Capital Management’s Return, AUM, and Holdings Hedge Funds Continue to Pile Into This Stock, Which Has Gained 667% in 2018 Kerrisdale Capital Investor Letter: The Bullish Thesis That Lead to 80% Q3 Returns 15 Penny Stocks Poised To Explode According To Hedge Funds 11 Largest Auto Insurance Companies In The US In 2019 10 Poorest Cities in America in 2019 8 Lowest Tar and Nicotine Cigarette Brands in 2019
Billionaire Hedge Funds