Hedge funds and large money managers usually invest with a focus on the long-term horizon and, therefore, short-lived dips or bumps on the charts, usually don’t make them change their opinion towards a company. This time it may be different. During the fourth quarter of 2018 we observed increased volatility and small-cap stocks underperformed the market. Things completely reversed during the first half of 2019. Hedge fund investor letters indicated that they are cutting their overall exposure, closing out some position and doubling down on others. Let’s take a look at the hedge fund sentiment towards Integer Holdings Corporation (NYSE:ITGR) to find out whether it was one of their high conviction long-term ideas.

Is Integer Holdings Corporation (NYSE:ITGR) the right pick for your portfolio? Prominent investors are taking a bearish view. The number of long hedge fund positions were cut by 11 recently. Our calculations also showed that ITGR isn’t among the 30 most popular stocks among hedge funds (view the video below). ITGR was in 18 hedge funds’ portfolios at the end of the second quarter of 2019. There were 29 hedge funds in our database with ITGR holdings at the end of the previous quarter.

According to most traders, hedge funds are seen as worthless, outdated investment tools of years past. While there are more than 8000 funds trading at present, Our researchers look at the aristocrats of this group, approximately 750 funds. These hedge fund managers orchestrate the majority of the smart money’s total capital, and by monitoring their finest equity investments, Insider Monkey has unsheathed numerous investment strategies that have historically outperformed the broader indices. Insider Monkey’s flagship hedge fund strategy beat the S&P 500 index by around 5 percentage points per year since its inception in May 2014. We were able to generate large returns even by identifying short candidates. Our portfolio of short stocks lost 25.7% since February 2017 (through September 30th) even though the market was up more than 33% during the same period. We just shared a list of 10 short targets in our latest quarterly update . 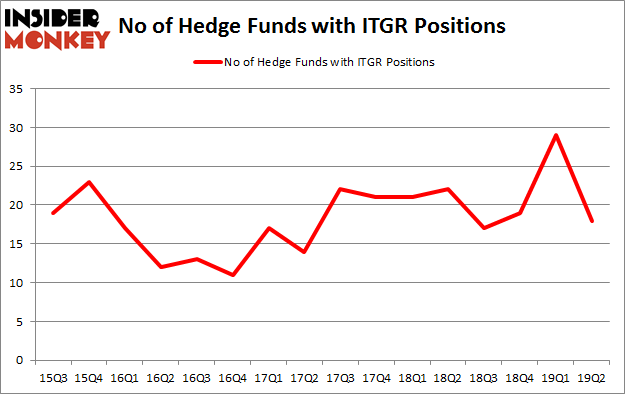 Since Integer Holdings Corporation (NYSE:ITGR) has witnessed declining sentiment from the entirety of the hedge funds we track, we can see that there is a sect of money managers that elected to cut their entire stakes last quarter. Interestingly, Israel Englander’s Millennium Management sold off the biggest stake of the “upper crust” of funds followed by Insider Monkey, valued at close to $23.6 million in stock. Renaissance Technologies, also dropped its stock, about $8.5 million worth. These transactions are intriguing to say the least, as aggregate hedge fund interest fell by 11 funds last quarter.

As you can see these stocks had an average of 18.75 hedge funds with bullish positions and the average amount invested in these stocks was $291 million. That figure was $190 million in ITGR’s case. Yelp Inc (NYSE:YELP) is the most popular stock in this table. On the other hand Genesis Energy, L.P. (NYSE:GEL) is the least popular one with only 4 bullish hedge fund positions. Integer Holdings Corporation (NYSE:ITGR) is not the least popular stock in this group but hedge fund interest is still below average. This is a slightly negative signal and we’d rather spend our time researching stocks that hedge funds are piling on. Our calculations showed that top 20 most popular stocks among hedge funds returned 24.4% in 2019 through September 30th and outperformed the S&P 500 ETF (SPY) by 4 percentage points. Unfortunately ITGR wasn’t nearly as popular as these 20 stocks (hedge fund sentiment was quite bearish); ITGR investors were disappointed as the stock returned -10% during the third quarter and underperformed the market. If you are interested in investing in large cap stocks with huge upside potential, you should check out the top 20 most popular stocks among hedge funds as many of these stocks already outperformed the market so far in 2019.