Is Insulet Corporation (PODD) A Good Stock To Buy?

Our extensive research has shown that imitating the smart money can generate significant returns for retail investors, which is why we track nearly 750 active prominent money managers and analyze their quarterly 13F filings. The stocks that are heavily bought by hedge funds historically outperformed the market, though there is no shortage of high profile failures like hedge funds’ recent losses in Facebook. Let’s take a closer look at what the funds we track think about Insulet Corporation (NASDAQ:PODD) in this article.

Insulet Corporation (NASDAQ:PODD) shares haven’t seen a lot of action during the third quarter. Overall, hedge fund sentiment was unchanged. The stock was in 22 hedge funds’ portfolios at the end of the fourth quarter of 2018. At the end of this article we will also compare PODD to other stocks including Morningstar, Inc. (NASDAQ:MORN), Ceridian HCM Holding Inc. (NYSE:CDAY), and Cable One Inc (NYSE:CABO) to get a better sense of its popularity.

What have hedge funds been doing with Insulet Corporation (NASDAQ:PODD)? 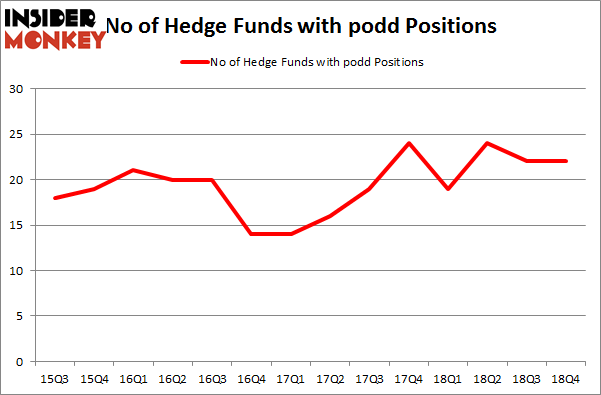 The largest stake in Insulet Corporation (NASDAQ:PODD) was held by D1 Capital Partners, which reported holding $132.9 million worth of stock at the end of September. It was followed by D E Shaw with a $109.9 million position. Other investors bullish on the company included Think Investments, Columbus Circle Investors, and Renaissance Technologies.

Because Insulet Corporation (NASDAQ:PODD) has experienced bearish sentiment from the entirety of the hedge funds we track, logic holds that there lies a certain “tier” of hedgies who sold off their positions entirely heading into Q3. Interestingly, John Overdeck and David Siegel’s Two Sigma Advisors sold off the largest stake of all the hedgies tracked by Insider Monkey, worth close to $22.8 million in stock. Anand Parekh’s fund, Alyeska Investment Group, also said goodbye to its stock, about $17.8 million worth. These moves are interesting, as aggregate hedge fund interest stayed the same (this is a bearish signal in our experience).

Let’s also examine hedge fund activity in other stocks – not necessarily in the same industry as Insulet Corporation (NASDAQ:PODD) but similarly valued. We will take a look at Morningstar, Inc. (NASDAQ:MORN), Ceridian HCM Holding Inc. (NYSE:CDAY), Cable One Inc (NYSE:CABO), and Leggett & Platt, Inc. (NYSE:LEG). All of these stocks’ market caps are closest to PODD’s market cap.

As you can see these stocks had an average of 15.25 hedge funds with bullish positions and the average amount invested in these stocks was $333 million. That figure was $393 million in PODD’s case. Morningstar, Inc. (NASDAQ:MORN) is the most popular stock in this table. On the other hand Leggett & Platt, Inc. (NYSE:LEG) is the least popular one with only 9 bullish hedge fund positions. Compared to these stocks Insulet Corporation (NASDAQ:PODD) is more popular among hedge funds. Our calculations showed that the top 15 most popular stocks among hedge funds returned 21.3% year-to-date through April 8th and outperformed the S&P 500 ETF (SPY) by more than 5 percentage points. Hedge funds were also right about betting on PODD, though not to the same extent, as the stock returned 19.3% and outperformed the market as well.