Is Insight Enterprises, Inc. (NSIT) A Good Stock To Buy ?

The financial regulations require hedge funds and wealthy investors that exceeded the $100 million equity holdings threshold to file a report that shows their positions at the end of every quarter. Even though it isn’t the intention, these filings to a certain extent level the playing field for ordinary investors. The latest round of 13F filings disclosed the funds’ positions on September 30th. We at Insider Monkey have made an extensive database of nearly 750 of those established hedge funds and famous value investors’ filings. In this article, we analyze how these elite funds and prominent investors traded Insight Enterprises, Inc. (NASDAQ:NSIT) based on those filings.

Is Insight Enterprises, Inc. (NASDAQ:NSIT) the right pick for your portfolio? Investors who are in the know are becoming more confident. The number of bullish hedge fund positions advanced by 7 lately. Our calculations also showed that NSIT isn’t among the 30 most popular stocks among hedge funds (click for Q3 rankings and see the video below for Q2 rankings). NSIT was in 21 hedge funds’ portfolios at the end of September. There were 14 hedge funds in our database with NSIT positions at the end of the previous quarter.

Unlike the largest US hedge funds that are convinced Dow will soar past 40,000 or the world’s most bearish hedge fund that’s more convinced than ever that a crash is coming, our long-short investment strategy doesn’t rely on bull or bear markets to deliver double digit returns. We only rely on the best performing hedge funds‘ buy/sell signals. Let’s take a peek at the new hedge fund action regarding Insight Enterprises, Inc. (NASDAQ:NSIT).

At the end of the third quarter, a total of 21 of the hedge funds tracked by Insider Monkey were bullish on this stock, a change of 50% from the previous quarter. Below, you can check out the change in hedge fund sentiment towards NSIT over the last 17 quarters. So, let’s review which hedge funds were among the top holders of the stock and which hedge funds were making big moves. 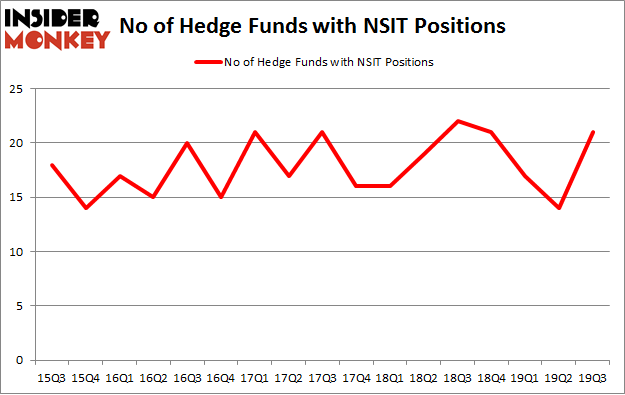 According to publicly available hedge fund and institutional investor holdings data compiled by Insider Monkey, Chuck Royce’s Royce & Associates has the most valuable position in Insight Enterprises, Inc. (NASDAQ:NSIT), worth close to $33.2 million, accounting for 0.3% of its total 13F portfolio. The second largest stake is held by Arrowstreet Capital, managed by Peter Rathjens, Bruce Clarke and John Campbell, which holds a $15.7 million position; the fund has less than 0.1%% of its 13F portfolio invested in the stock. Remaining professional money managers that hold long positions consist of Richard S. Pzena’s Pzena Investment Management, Cliff Asness’s AQR Capital Management and Paul Marshall and Ian Wace’s Marshall Wace. In terms of the portfolio weights assigned to each position Zebra Capital Management allocated the biggest weight to Insight Enterprises, Inc. (NASDAQ:NSIT), around 1.34% of its 13F portfolio. Royce & Associates is also relatively very bullish on the stock, earmarking 0.31 percent of its 13F equity portfolio to NSIT.

As aggregate interest increased, some big names have been driving this bullishness. Marshall Wace, managed by Paul Marshall and Ian Wace, created the most outsized position in Insight Enterprises, Inc. (NASDAQ:NSIT). Marshall Wace had $9 million invested in the company at the end of the quarter. Renaissance Technologies also made a $6.9 million investment in the stock during the quarter. The other funds with new positions in the stock are Ken Griffin’s Citadel Investment Group, Matthew Hulsizer’s PEAK6 Capital Management, and Brandon Haley’s Holocene Advisors.

As you can see these stocks had an average of 20.75 hedge funds with bullish positions and the average amount invested in these stocks was $261 million. That figure was $116 million in NSIT’s case. PTC Therapeutics, Inc. (NASDAQ:PTCT) is the most popular stock in this table. On the other hand National Storage Affiliates Trust (NYSE:NSA) is the least popular one with only 15 bullish hedge fund positions. Insight Enterprises, Inc. (NASDAQ:NSIT) is not the most popular stock in this group but hedge fund interest is still above average. Our calculations showed that top 20 most popular stocks among hedge funds returned 37.4% in 2019 through the end of November and outperformed the S&P 500 ETF (SPY) by 9.9 percentage points. Hedge funds were also right about betting on NSIT as the stock returned 17.8% during the fourth quarter (through the end of November) and outperformed the market. Hedge funds were rewarded for their relative bullishness.