Is Ingersoll-Rand Plc (IR) A Good Stock To Buy According To Hedgies?

Out of thousands of stocks that are currently traded on the market, it is difficult to identify those that will really generate strong returns. Hedge funds and institutional investors spend millions of dollars on analysts with MBAs and PhDs, who are industry experts and well connected to other industry and media insiders on top of that. Individual investors can piggyback the hedge funds employing these talents and can benefit from their vast resources and knowledge in that way. We analyze quarterly 13F filings of nearly 750 hedge funds and, by looking at the smart money sentiment that surrounds a stock, we can determine whether it has the potential to beat the market over the long-term. Therefore, let’s take a closer look at what smart money thinks about Ingersoll-Rand Plc (NYSE:IR).

Hedge fund interest in Ingersoll-Rand Plc (NYSE:IR) shares was flat at the end of last quarter. This is usually a negative indicator. At the end of this article we will also compare IR to other stocks including Paychex, Inc. (NASDAQ:PAYX), MPLX LP (NYSE:MPLX), and Brown-Forman Corporation (NYSE:BF) to get a better sense of its popularity.

In today’s marketplace there are dozens of tools shareholders put to use to grade publicly traded companies. A duo of the most useful tools are hedge fund and insider trading moves. We have shown that, historically, those who follow the top picks of the top money managers can outpace the market by a significant amount (see the details here).

Unlike the largest US hedge funds that are convinced Dow will soar past 40,000 or the world’s most bearish hedge fund that’s more convinced than ever that a crash is coming, our long-short investment strategy doesn’t rely on bull or bear markets to deliver double digit returns. We only rely on the best performing hedge funds‘ buy/sell signals. We’re going to review the fresh hedge fund action surrounding Ingersoll-Rand Plc (NYSE:IR).

What have hedge funds been doing with Ingersoll-Rand Plc (NYSE:IR)? 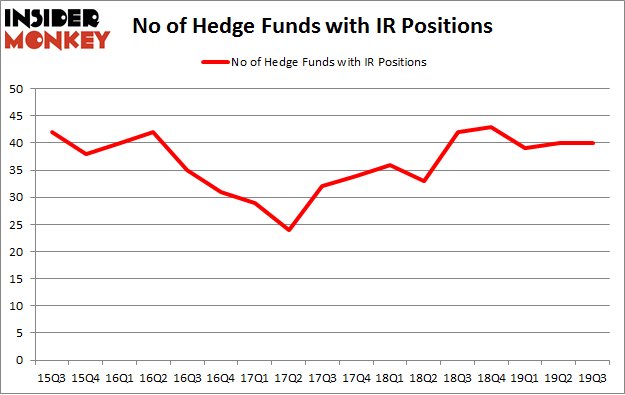 More specifically, Generation Investment Management was the largest shareholder of Ingersoll-Rand Plc (NYSE:IR), with a stake worth $350.8 million reported as of the end of September. Trailing Generation Investment Management was Citadel Investment Group, which amassed a stake valued at $303.4 million. Holocene Advisors, Impax Asset Management, and AQR Capital Management were also very fond of the stock, becoming one of the largest hedge fund holders of the company. In terms of the portfolio weights assigned to each position Bristol Gate Capital Partners allocated the biggest weight to Ingersoll-Rand Plc (NYSE:IR), around 4.67% of its portfolio. Gates Capital Management is also relatively very bullish on the stock, dishing out 3.66 percent of its 13F equity portfolio to IR.

Due to the fact that Ingersoll-Rand Plc (NYSE:IR) has experienced a decline in interest from the aggregate hedge fund industry, it’s easy to see that there is a sect of funds that slashed their positions entirely in the third quarter. At the top of the heap, Aaron Cowen’s Suvretta Capital Management sold off the biggest investment of all the hedgies monitored by Insider Monkey, valued at close to $96 million in stock. Alexander Mitchell’s fund, Scopus Asset Management, also dumped its stock, about $22.3 million worth. These bearish behaviors are important to note, as aggregate hedge fund interest stayed the same (this is a bearish signal in our experience).

As you can see these stocks had an average of 31.5 hedge funds with bullish positions and the average amount invested in these stocks was $1615 million. That figure was $1725 million in IR’s case. IQVIA Holdings, Inc. (NYSE:IQV) is the most popular stock in this table. On the other hand MPLX LP (NYSE:MPLX) is the least popular one with only 13 bullish hedge fund positions. Ingersoll-Rand Plc (NYSE:IR) is not the most popular stock in this group but hedge fund interest is still above average. Our calculations showed that top 20 most popular stocks among hedge funds returned 34.7% in 2019 through November 22nd and outperformed the S&P 500 ETF (SPY) by 8.5 percentage points. Hedge funds were also right about betting on IR, though not to the same extent, as the stock returned 5.6% during the fourth quarter (through 11/22) and outperformed the market as well.