Is Independent Bank Group Inc (NASDAQ:IBTX) a good investment right now? We check hedge fund and billionaire investor sentiment before delving into hours of research. Hedge funds spend millions of dollars on Ivy League graduates, expert networks, and get tips from investment bankers and industry insiders. Sure they sometimes fail miserably, but their consensus stock picks historically outperformed the market after adjusting for known risk factors.

Is Independent Bank Group Inc (NASDAQ:IBTX) a first-rate stock to buy now? The smart money is getting less bullish. The number of long hedge fund positions were cut by 3 lately. Our calculations also showed that IBTX isn’t among the 30 most popular stocks among hedge funds.

According to most market participants, hedge funds are perceived as underperforming, old financial tools of yesteryear. While there are more than 8000 funds in operation at present, Our experts hone in on the aristocrats of this group, about 750 funds. These hedge fund managers orchestrate most of the smart money’s total asset base, and by observing their top picks, Insider Monkey has figured out many investment strategies that have historically outpaced Mr. Market. Insider Monkey’s flagship hedge fund strategy outrun the S&P 500 index by around 5 percentage points a year since its inception in May 2014 through June 18th. We were able to generate large returns even by identifying short candidates. Our portfolio of short stocks lost 28.2% since February 2017 (through June 18th) even though the market was up nearly 30% during the same period. We just shared a list of 5 short targets in our latest quarterly update and they are already down an average of 8.2% in a month whereas our long picks outperformed the market by 2.5 percentage points in this volatile 5 week period (our long picks also beat the market by 15 percentage points so far this year).

Heading into the second quarter of 2019, a total of 10 of the hedge funds tracked by Insider Monkey were bullish on this stock, a change of -23% from one quarter earlier. On the other hand, there were a total of 10 hedge funds with a bullish position in IBTX a year ago. With hedge funds’ sentiment swirling, there exists a select group of notable hedge fund managers who were adding to their stakes considerably (or already accumulated large positions). 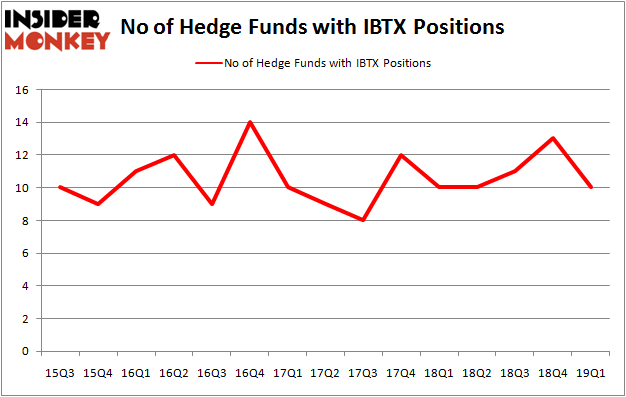 The largest stake in Independent Bank Group Inc (NASDAQ:IBTX) was held by Mendon Capital Advisors, which reported holding $30.5 million worth of stock at the end of March. It was followed by Citadel Investment Group with a $18.6 million position. Other investors bullish on the company included Millennium Management, Renaissance Technologies, and Elizabeth Park Capital Management.

Since Independent Bank Group Inc (NASDAQ:IBTX) has witnessed falling interest from the entirety of the hedge funds we track, it’s safe to say that there exists a select few funds that decided to sell off their positions entirely in the third quarter. Intriguingly, Paul Marshall and Ian Wace’s Marshall Wace LLP dumped the largest position of the “upper crust” of funds monitored by Insider Monkey, worth close to $8.6 million in stock, and Paul Magidson, Jonathan Cohen. And Ostrom Enders’s Castine Capital Management was right behind this move, as the fund dropped about $2.8 million worth. These moves are intriguing to say the least, as aggregate hedge fund interest fell by 3 funds in the third quarter.

As you can see these stocks had an average of 17.25 hedge funds with bullish positions and the average amount invested in these stocks was $230 million. That figure was $128 million in IBTX’s case. Uniqure NV (NASDAQ:QURE) is the most popular stock in this table. On the other hand Grupo Aeroportuario del Centro Norte, S.A.B. de C.V. (NASDAQ:OMAB) is the least popular one with only 6 bullish hedge fund positions. Independent Bank Group Inc (NASDAQ:IBTX) is not the least popular stock in this group but hedge fund interest is still below average. Our calculations showed that top 20 most popular stocks among hedge funds returned 6.2% in Q2 through June 19th and outperformed the S&P 500 ETF (SPY) by nearly 3 percentage points. A small number of hedge funds were also right about betting on IBTX as the stock returned 6.9% during the same time frame and outperformed the market by an even larger margin.