Is Incyte Corporation (INCY) A Good Stock To Buy?

To most investors, hedge funds are assumed to be unimportant, outdated financial tools of the past. While there are greater than 8,000 funds with their doors open today, Our experts look at the elite of this group, around 700 funds. Most estimates calculate that this group of people control most of the hedge fund industry’s total capital, and by keeping an eye on their matchless stock picks, Insider Monkey has unearthed a number of investment strategies that have historically outrun the S&P 500 index. Insider Monkey’s flagship hedge fund strategy outstripped the S&P 500 index by 6 percentage points a year since its inception in May 2014 through early November 2018. We were able to generate large returns even by identifying short candidates. Our portfolio of short stocks lost 24% since February 2017 (through December 3rd) even though the market was up nearly 23% during the same period. We just shared a list of 11 short targets in our latest quarterly update.

At Q3’s end, a total of 37 of the hedge funds tracked by Insider Monkey held long positions in this stock, no change from the second quarter of 2018. Below, you can check out the change in hedge fund sentiment towards INCY over the last 13 quarters. With hedge funds’ positions undergoing their usual ebb and flow, there exists a few notable hedge fund managers who were upping their stakes significantly (or already accumulated large positions). 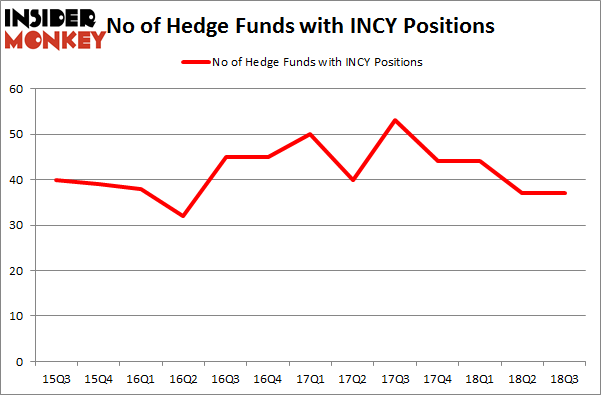 Among these funds, Baker Bros. Advisors held the most valuable stake in Incyte Corporation (NASDAQ:INCY), which was worth $2366.1 million at the end of the third quarter. On the second spot was Matrix Capital Management which amassed $318.9 million worth of shares. Moreover, Citadel Investment Group, Millennium Management, and Two Sigma Advisors were also bullish on Incyte Corporation (NASDAQ:INCY), allocating a large percentage of their portfolios to this stock.

Seeing as Incyte Corporation (NASDAQ:INCY) has faced declining sentiment from hedge fund managers, it’s safe to say that there lies a certain “tier” of funds who sold off their entire stakes by the end of the third quarter. It’s worth mentioning that Samuel Isaly’s OrbiMed Advisors dumped the biggest stake of all the hedgies monitored by Insider Monkey, comprising about $29.3 million in stock. Steven Boyd’s fund, Armistice Capital, also sold off its stock, about $28.7 million worth. These transactions are important to note, as total hedge fund interest stayed the same (this is a bearish signal in our experience).

As you can see these stocks had an average of 27.75 hedge funds with bullish positions and the average amount invested in these stocks was $957 million. That figure was $3.26 billion in INCY’s case. Lincoln National Corporation (NYSE:LNC) is the most popular stock in this table. On the other hand Genuine Parts Company (NYSE:GPC) is the least popular one with only 21 bullish hedge fund positions. Compared to these stocks Incyte Corporation (NASDAQ:INCY) is more popular among hedge funds. Considering that hedge funds are fond of this stock in relation to its market cap peers, it may be a good idea to analyze it in detail and potentially include it in your portfolio.