Is INCY A Good Stock To Buy According To Hedge Funds?

After several tireless days we have finished crunching the numbers from nearly 817 13F filings issued by the elite hedge funds and other investment firms that we track at Insider Monkey, which disclosed those firms’ equity portfolios as of September 30th. The results of that effort will be put on display in this article, as we share valuable insight into the smart money sentiment towards Incyte Corporation (NASDAQ:INCY).

Is INCY a good stock to buy? Investors who are in the know were taking a bullish view. The number of long hedge fund positions moved up by 6 lately. Incyte Corporation (NASDAQ:INCY) was in 35 hedge funds’ portfolios at the end of September. The all time high for this statistic is 53. Our calculations also showed that INCY isn’t among the 30 most popular stocks among hedge funds (click for Q3 rankings and see the video for a quick look at the top 5 stocks).

At Insider Monkey we leave no stone unturned when looking for the next great investment idea. For example, the House passed a landmark bill decriminalizing marijuana. So, we are checking out this under the radar cannabis stock right now. We go through lists like the 15 best blue chip stocks to buy to pick the best large-cap stocks to buy. Even though we recommend positions in only a tiny fraction of the companies we analyze, we check out as many stocks as we can. We read hedge fund investor letters and listen to stock pitches at hedge fund conferences. You can subscribe to our free daily newsletter on our website. Keeping this in mind let’s view the key hedge fund action surrounding Incyte Corporation (NASDAQ:INCY).

Do Hedge Funds Think INCY Is A Good Stock To Buy Now? 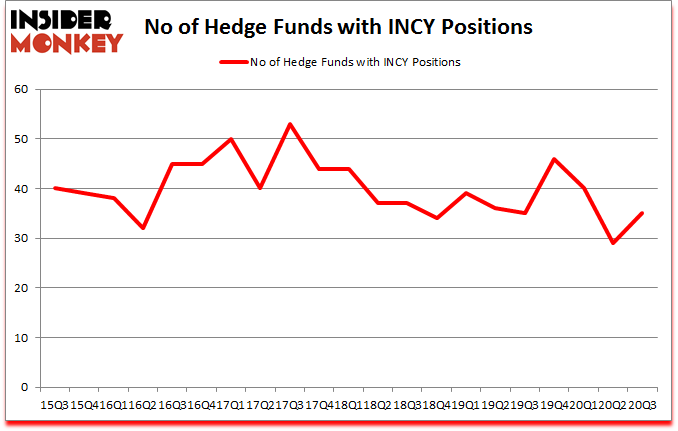 According to publicly available hedge fund and institutional investor holdings data compiled by Insider Monkey, Julian Baker and Felix Baker’s Baker Bros. Advisors has the biggest position in Incyte Corporation (NASDAQ:INCY), worth close to $2.8716 billion, accounting for 11.5% of its total 13F portfolio. The second most bullish fund manager is Renaissance Technologies, holding a $556.9 million position; 0.6% of its 13F portfolio is allocated to the stock. Some other members of the smart money with similar optimism contain John Overdeck and David Siegel’s Two Sigma Advisors, Steven Boyd’s Armistice Capital and Brian Ashford-Russell and Tim Woolley’s Polar Capital. In terms of the portfolio weights assigned to each position Baker Bros. Advisors allocated the biggest weight to Incyte Corporation (NASDAQ:INCY), around 11.47% of its 13F portfolio. Bridger Management is also relatively very bullish on the stock, earmarking 2.46 percent of its 13F equity portfolio to INCY.

Now, key hedge funds have jumped into Incyte Corporation (NASDAQ:INCY) headfirst. Point72 Asset Management, managed by Steve Cohen, created the most valuable position in Incyte Corporation (NASDAQ:INCY). Point72 Asset Management had $23.4 million invested in the company at the end of the quarter. Dmitry Balyasny’s Balyasny Asset Management also made a $13.6 million investment in the stock during the quarter. The other funds with new positions in the stock are Peter Rathjens, Bruce Clarke and John Campbell’s Arrowstreet Capital, Arthur B Cohen and Joseph Healey’s Healthcor Management LP, and Mika Toikka’s AlphaCrest Capital Management.

As you can see these stocks had an average of 34.3 hedge funds with bullish positions and the average amount invested in these stocks was $1184 million. That figure was $3821 million in INCY’s case. KKR & Co Inc. (NYSE:KKR) is the most popular stock in this table. On the other hand Ameren Corporation (NYSE:AEE) is the least popular one with only 20 bullish hedge fund positions. Incyte Corporation (NASDAQ:INCY) is not the most popular stock in this group but hedge fund interest is still above average. Our overall hedge fund sentiment score for INCY is 54.8. Stocks with higher number of hedge fund positions relative to other stocks as well as relative to their historical range receive a higher sentiment score. This is a slightly positive signal but we’d rather spend our time researching stocks that hedge funds are piling on. Our calculations showed that top 20 most popular stocks among hedge funds returned 41.3% in 2019 and outperformed the S&P 500 ETF (SPY) by 10 percentage points. These stocks gained 33.3% in 2020 through December 18th and beat the market again by 16.4 percentage points. Unfortunately INCY wasn’t nearly as popular as these 20 stocks and hedge funds that were betting on INCY were disappointed as the stock returned -1.6% since the end of September (through 12/18) and underperformed the market. If you are interested in investing in large cap stocks with huge upside potential, you should check out the top 20 most popular stocks among hedge funds as many of these stocks already outperformed the market so far this year.