The elite funds run by legendary investors such as David Tepper and Dan Loeb make hundreds of millions of dollars for themselves and their investors by spending enormous resources doing research on small cap stocks that big investment banks don’t follow. Because of their pay structures, they have strong incentives to do the research necessary to beat the market. That’s why we pay close attention to what they think in small cap stocks. In this article, we take a closer look at ImmunoGen, Inc. (NASDAQ:IMGN) from the perspective of those elite funds.

ImmunoGen, Inc. (NASDAQ:IMGN) shareholders have witnessed a decrease in enthusiasm from smart money recently. Our calculations also showed that IMGN isn’t among the 30 most popular stocks among hedge funds.

To the average investor there are a multitude of indicators stock traders put to use to appraise their stock investments. Two of the most innovative indicators are hedge fund and insider trading signals. Our experts have shown that, historically, those who follow the best picks of the top investment managers can outperform the market by a healthy amount (see the details here).

How have hedgies been trading ImmunoGen, Inc. (NASDAQ:IMGN)? 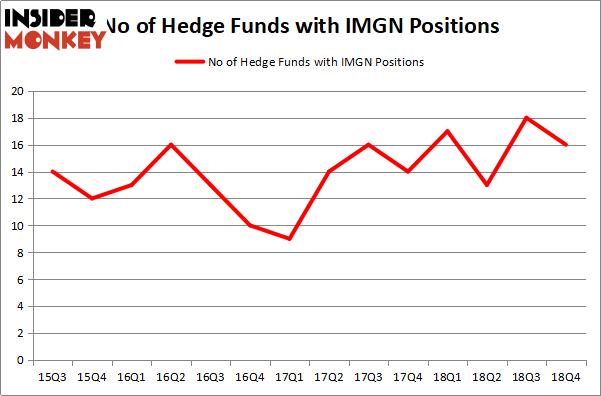 The largest stake in ImmunoGen, Inc. (NASDAQ:IMGN) was held by Redmile Group, which reported holding $52.2 million worth of stock at the end of December. It was followed by Renaissance Technologies with a $29.7 million position. Other investors bullish on the company included Millennium Management, Point72 Asset Management, and Citadel Investment Group.

Due to the fact that ImmunoGen, Inc. (NASDAQ:IMGN) has witnessed declining sentiment from the smart money, we can see that there exists a select few hedge funds that decided to sell off their full holdings in the third quarter. At the top of the heap, Samuel Isaly’s OrbiMed Advisors sold off the biggest position of the 700 funds tracked by Insider Monkey, totaling about $13.9 million in stock. Anand Parekh’s fund, Alyeska Investment Group, also said goodbye to its stock, about $0.9 million worth. These transactions are intriguing to say the least, as aggregate hedge fund interest was cut by 2 funds in the third quarter.

As you can see these stocks had an average of 10.75 hedge funds with bullish positions and the average amount invested in these stocks was $45 million. That figure was $141 million in IMGN’s case. OraSure Technologies, Inc. (NASDAQ:OSUR) is the most popular stock in this table. On the other hand Delek Logistics Partners LP (NYSE:DKL) is the least popular one with only 2 bullish hedge fund positions. ImmunoGen, Inc. (NASDAQ:IMGN) is not the most popular stock in this group but hedge fund interest is still above average. This is a slightly positive signal but we’d rather spend our time researching stocks that hedge funds are piling on. Our calculations showed that top 15 most popular stocks) among hedge funds returned 24.2% through April 22nd and outperformed the S&P 500 ETF (SPY) by more than 7 percentage points. Unfortunately IMGN wasn’t nearly as popular as these 15 stock and hedge funds that were betting on IMGN were disappointed as the stock returned -51.7% and underperformed the market. If you are interested in investing in large cap stocks with huge upside potential, you should check out the top 15 most popular stocks) among hedge funds as 13 of these stocks already outperformed the market this year.