“Market volatility has picked up again over the past few weeks. Headlines highlight risks regarding interest rates, the Fed, China, house prices, auto sales, trade wars, and more. Uncertainty abounds. But doesn’t it always? I have no view on whether the recent volatility will continue for a while, or whether the market will be back at all-time highs before we know it. I remain focused on preserving and growing our capital, and continue to believe that the best way to do so is via a value-driven, concentrated, patient approach. I shun consensus holdings, rich valuations, and market fads, in favor of solid, yet frequently off-the-beaten-path, businesses run by excellent, aligned management teams, purchased at deep discounts to intrinsic value,” are the words of Maran Capital’s Dan Roller. His stock picks have been beating the S&P 500 Index handily. We pay attention to what hedge funds are doing in a particular stock before considering a potential investment because it works for us. So let’s take a glance at the smart money sentiment towards i3 Verticals, Inc. (NASDAQ:IIIV) and see how it was affected.

i3 Verticals, Inc. (NASDAQ:IIIV) was in 8 hedge funds’ portfolios at the end of December. IIIV investors should be aware of a decrease in hedge fund sentiment in recent months. There were 12 hedge funds in our database with IIIV positions at the end of the previous quarter. Our calculations also showed that IIIV isn’t among the 30 most popular stocks among hedge funds.

How have hedgies been trading i3 Verticals, Inc. (NASDAQ:IIIV)? 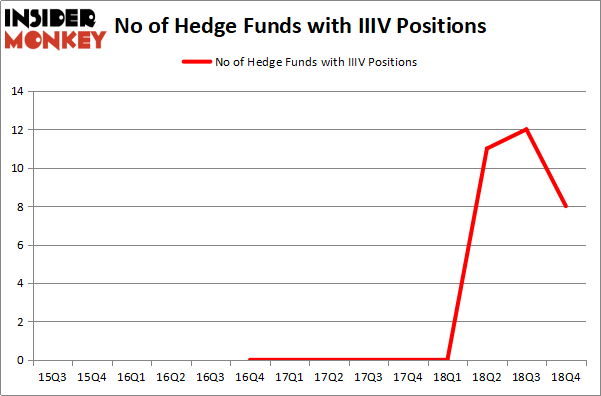 More specifically, Harbert Management was the largest shareholder of i3 Verticals, Inc. (NASDAQ:IIIV), with a stake worth $42.4 million reported as of the end of December. Trailing Harbert Management was Driehaus Capital, which amassed a stake valued at $11.6 million. Crosslink Capital, Citadel Investment Group, and AlphaOne Capital Partners were also very fond of the stock, giving the stock large weights in their portfolios.

Due to the fact that i3 Verticals, Inc. (NASDAQ:IIIV) has experienced a decline in interest from the aggregate hedge fund industry, we can see that there were a few hedge funds that slashed their full holdings by the end of the third quarter. Interestingly, Paul Marshall and Ian Wace’s Marshall Wace LLP said goodbye to the largest stake of the “upper crust” of funds followed by Insider Monkey, worth an estimated $4.1 million in stock, and Anand Parekh’s Alyeska Investment Group was right behind this move, as the fund dumped about $2.3 million worth. These moves are intriguing to say the least, as total hedge fund interest was cut by 4 funds by the end of the third quarter.

Let’s now take a look at hedge fund activity in other stocks – not necessarily in the same industry as i3 Verticals, Inc. (NASDAQ:IIIV) but similarly valued. These stocks are Univest Corp. of PA (NASDAQ:UVSP), John B. Sanfilippo & Son, Inc. (NASDAQ:JBSS), ChipMOS Technologies (Bermuda) Ltd (NASDAQ:IMOS), and Hanmi Financial Corp (NASDAQ:HAFC). This group of stocks’ market valuations are closest to IIIV’s market valuation.

As you can see these stocks had an average of 6.5 hedge funds with bullish positions and the average amount invested in these stocks was $44 million. That figure was $79 million in IIIV’s case. John B. Sanfilippo & Son, Inc. (NASDAQ:JBSS) is the most popular stock in this table. On the other hand ChipMOS Technologies (Bermuda) Ltd (NASDAQ:IMOS) is the least popular one with only 1 bullish hedge fund positions. i3 Verticals, Inc. (NASDAQ:IIIV) is not the most popular stock in this group but hedge fund interest is still above average. This is a slightly positive signal but we’d rather spend our time researching stocks that hedge funds are piling on. Our calculations showed that top 15 most popular stocks) among hedge funds returned 24.2% through April 22nd and outperformed the S&P 500 ETF (SPY) by more than 7 percentage points. Unfortunately IIIV wasn’t nearly as popular as these 15 stock and hedge funds that were betting on IIIV were disappointed as the stock returned 2.3% and underperformed the market. If you are interested in investing in large cap stocks with huge upside potential, you should check out the top 15 most popular stocks) among hedge funds as 13 of these stocks already outperformed the market this year.