Is Hub Group Inc (HUBG) A Good Stock To Buy?

Is Hub Group Inc (NASDAQ:HUBG) a buy right now? Prominent investors are selling. The number of bullish hedge fund bets retreated by 5 in recent months. Our calculations also showed that HUBG isn’t among the 30 most popular stocks among hedge funds (see the video below). HUBG was in 18 hedge funds’ portfolios at the end of the second quarter of 2019. There were 23 hedge funds in our database with HUBG positions at the end of the previous quarter. 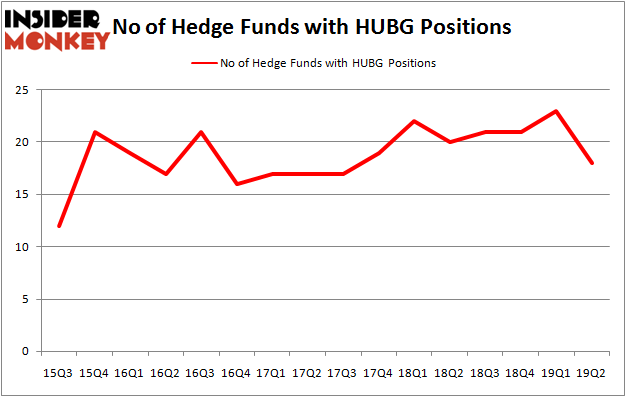 How have hedgies been trading Hub Group Inc (NASDAQ:HUBG)?

The largest stake in Hub Group Inc (NASDAQ:HUBG) was held by Diamond Hill Capital, which reported holding $136.6 million worth of stock at the end of March. It was followed by Fisher Asset Management with a $54.3 million position. Other investors bullish on the company included Millennium Management, D E Shaw, and Citadel Investment Group.

Due to the fact that Hub Group Inc (NASDAQ:HUBG) has experienced bearish sentiment from hedge fund managers, logic holds that there lies a certain “tier” of hedge funds that decided to sell off their positions entirely heading into Q3. Intriguingly, Alexander Mitchell’s Scopus Asset Management sold off the largest investment of the 750 funds monitored by Insider Monkey, totaling an estimated $16.7 million in stock, and Richard S. Meisenberg’s ACK Asset Management was right behind this move, as the fund dumped about $7.9 million worth. These bearish behaviors are interesting, as total hedge fund interest was cut by 5 funds heading into Q3.

As you can see these stocks had an average of 9.75 hedge funds with bullish positions and the average amount invested in these stocks was $57 million. That figure was $245 million in HUBG’s case. MRC Global Inc (NYSE:MRC) is the most popular stock in this table. On the other hand Sirius International Insurance Group, Ltd. (NASDAQ:SG) is the least popular one with only 1 bullish hedge fund positions. Compared to these stocks Hub Group Inc (NASDAQ:HUBG) is more popular among hedge funds. Our calculations showed that top 20 most popular stocks among hedge funds returned 24.4% in 2019 through September 30th and outperformed the S&P 500 ETF (SPY) by 4 percentage points. Hedge funds were also right about betting on HUBG as the stock returned 10.8% during Q3 and outperformed the market by an even larger margin. Hedge funds were clearly right about piling into this stock relative to other stocks with similar market capitalizations.