The latest 13F reporting period has come and gone, and Insider Monkey is again at the forefront when it comes to making use of this gold mine of data. We have processed the filings of the more than 700 world-class investment firms that we track and now have access to the collective wisdom contained in these filings, which are based on their December 31 holdings, data that is available nowhere else. Should you consider HSBC Holdings plc (NYSE:HSBC) for your portfolio? We’ll look to this invaluable collective wisdom for the answer.

HSBC Holdings plc (NYSE:HSBC) was in 11 hedge funds’ portfolios at the end of December. HSBC has experienced an increase in support from the world’s most elite money managers recently. There were 6 hedge funds in our database with HSBC positions at the end of the previous quarter. Our calculations also showed that HSBC isn’t among the 30 most popular stocks among hedge funds. 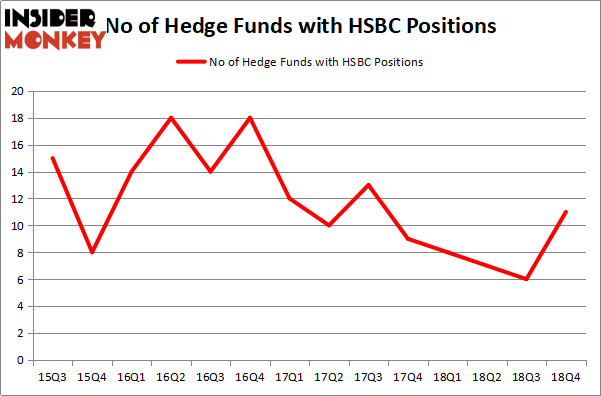 According to publicly available hedge fund and institutional investor holdings data compiled by Insider Monkey, Ken Fisher’s Fisher Asset Management has the most valuable position in HSBC Holdings plc (NYSE:HSBC), worth close to $661.8 million, corresponding to 0.9% of its total 13F portfolio. The second largest stake is held by Segantii Capital, managed by Simon Sadler, which holds a $165.4 million position; 13.8% of its 13F portfolio is allocated to the company. Some other professional money managers that hold long positions contain Ben Levine, Andrew Manuel and Stefan Renold’s LMR Partners, Jim Simons’s Renaissance Technologies and Israel Englander’s Millennium Management.

Now, key hedge funds were breaking ground themselves. Segantii Capital, managed by Simon Sadler, assembled the most outsized position in HSBC Holdings plc (NYSE:HSBC). Segantii Capital had $165.4 million invested in the company at the end of the quarter. Ben Levine, Andrew Manuel and Stefan Renold’s LMR Partners also made a $88.6 million investment in the stock during the quarter. The other funds with brand new HSBC positions are Israel Englander’s Millennium Management, Ken Griffin’s Citadel Investment Group, and David Costen Haley’s HBK Investments.

As you can see these stocks had an average of 65.25 hedge funds with bullish positions and the average amount invested in these stocks was $4843 million. That figure was $1011 million in HSBC’s case. Comcast Corporation (NASDAQ:CMCSA) is the most popular stock in this table. On the other hand PepsiCo, Inc. (NYSE:PEP) is the least popular one with only 53 bullish hedge fund positions. Compared to these stocks HSBC Holdings plc (NYSE:HSBC) is even less popular than PEP. Our calculations showed that top 15 most popular stocks among hedge funds returned 19.7% through March 15th and outperformed the S&P 500 ETF (SPY) by 6.6 percentage points. Unfortunately HSBC wasn’t in this group. Hedge funds that bet on HSBC were disappointed as the stock returned 3.3% and underperformed the market. If you are interested in investing in large cap stocks, you should check out the top 15 hedge fund stocks as 13 of these outperformed the market.