H&R Block, Inc. (NYSE:HRB) investors should pay attention to a decrease in enthusiasm from smart money in recent months. Our calculations also showed that HRB isn’t among the 30 most popular stocks among hedge funds.

In the financial world there are dozens of tools stock market investors can use to evaluate their holdings. A pair of the less utilized tools are hedge fund and insider trading sentiment. Our experts have shown that, historically, those who follow the top picks of the top fund managers can outpace the broader indices by a solid amount (see the details here).

How have hedgies been trading H&R Block, Inc. (NYSE:HRB)? 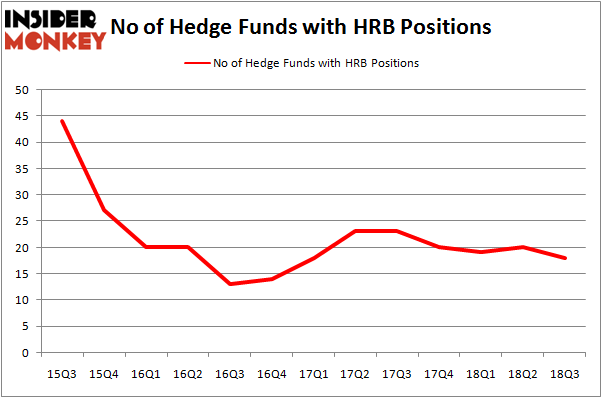 Among these funds, AQR Capital Management held the most valuable stake in H&R Block, Inc. (NYSE:HRB), which was worth $42.5 million at the end of the third quarter. On the second spot was D E Shaw which amassed $32.5 million worth of shares. Moreover, GAMCO Investors, Millennium Management, and Citadel Investment Group were also bullish on H&R Block, Inc. (NYSE:HRB), allocating a large percentage of their portfolios to this stock.

Since H&R Block, Inc. (NYSE:HRB) has faced declining sentiment from the aggregate hedge fund industry, it’s easy to see that there was a specific group of hedgies who sold off their full holdings in the third quarter. Interestingly, Alexander Mitchell’s Scopus Asset Management cut the largest investment of all the hedgies followed by Insider Monkey, worth about $10.3 million in stock. Paul Marshall and Ian Wace’s fund, Marshall Wace LLP, also cut its stock, about $8.7 million worth. These bearish behaviors are intriguing to say the least, as total hedge fund interest fell by 2 funds in the third quarter.

As you can see these stocks had an average of 16.75 hedge funds with bullish positions and the average amount invested in these stocks was $357 million. That figure was $183 million in HRB’s case. Williams-Sonoma, Inc. (NYSE:WSM) is the most popular stock in this table. On the other hand Centrais Elétricas Brasileiras S.A. – Eletrobras (NYSE:EBR) is the least popular one with only 4 bullish hedge fund positions. H&R Block, Inc. (NYSE:HRB) is not the most popular stock in this group but hedge fund interest is still above average. This is a slightly positive signal but we’d rather spend our time researching stocks that hedge funds are piling on. In this regard WSM might be a better candidate to consider a long position.