Is Homology Medicines, Inc. (FIXX) A Good Stock To Buy?

Many investors, including Paul Tudor Jones or Stan Druckenmiller, have been saying for a while now that the current market is overvalued due to a low interest rate environment that leads to companies swapping their equity for debt and focusing mostly on short-term performance such as beating the quarterly earnings estimates. In the fourth quarter, many investors lost money due to unpredictable events such as the sudden increase in long-term interest rates and unintended consequences of the trade war with China. Nevertheless, many of the stocks that tanked in the third quarter still sport strong fundamentals and their decline was more related to the general market sentiment rather than their individual performance and hedge funds kept their bullish stance. In this article we will find out how hedge fund sentiment to Homology Medicines, Inc. (NASDAQ:FIXX) changed recently.

Homology Medicines, Inc. (NASDAQ:FIXX) has seen a decrease in support from the world’s most elite money managers recently. Our calculations also showed that FIXX isn’t among the 30 most popular stocks among hedge funds.

Heading into the fourth quarter of 2018, a total of 6 of the hedge funds tracked by Insider Monkey held long positions in this stock, a change of -14% from the previous quarter. The graph below displays the number of hedge funds with bullish position in FIXX over the last 13 quarters. So, let’s see which hedge funds were among the top holders of the stock and which hedge funds were making big moves. 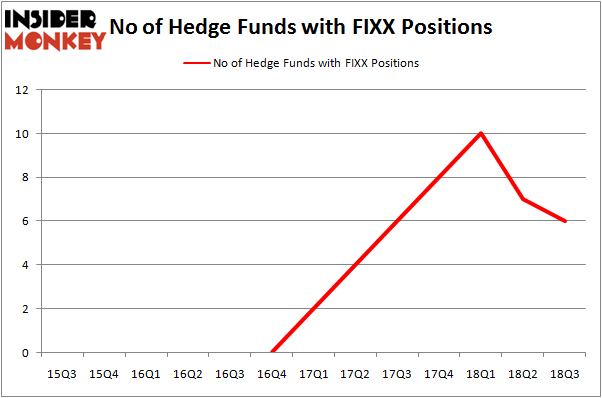 Since Homology Medicines, Inc. (NASDAQ:FIXX) has faced bearish sentiment from the smart money, it’s easy to see that there exists a select few hedgies who sold off their entire stakes in the third quarter. At the top of the heap, Anand Parekh’s Alyeska Investment Group sold off the biggest investment of the 700 funds monitored by Insider Monkey, worth an estimated $2 million in stock. Ken Griffin’s fund, Citadel Investment Group, also cut its stock, about $0.3 million worth. These moves are intriguing to say the least, as total hedge fund interest fell by 1 funds in the third quarter.

As you can see these stocks had an average of 16.25 hedge funds with bullish positions and the average amount invested in these stocks was $169 million. That figure was $146 million in FIXX’s case. Social Capital Hedosophia Holdings Corp. (NYSE:IPOA) is the most popular stock in this table. On the other hand Carolina Financial Corporation (NASDAQ:CARO) is the least popular one with only 6 bullish hedge fund positions. Compared to these stocks Homology Medicines, Inc. (NASDAQ:FIXX) is even less popular than CARO. Considering that hedge funds aren’t fond of this stock in relation to other companies analyzed in this article, it may be a good idea to analyze it in detail and understand why the smart money isn’t behind this stock. This isn’t necessarily bad news. Although it is possible that hedge funds may think the stock is overpriced and view the stock as a short candidate, they may not be very familiar with the bullish thesis. In either case more research is warranted.