Is HLF A Good Stock To Buy According To Hedge Funds?

In this article you are going to find out whether hedge funds think Herbalife Nutrition Ltd. (NYSE:HLF) is a good investment right now. We like to check what the smart money thinks first before doing extensive research on a given stock. Although there have been several high profile failed hedge fund picks, the consensus picks among hedge fund investors have historically outperformed the market after adjusting for known risk attributes. It’s not surprising given that hedge funds have access to better information and more resources to predict the winners in the stock market.

Is HLF a good stock to buy? Herbalife Nutrition Ltd. (NYSE:HLF) shares haven’t seen a lot of action during the second quarter. Overall, hedge fund sentiment was unchanged. The stock was in 36 hedge funds’ portfolios at the end of the third quarter of 2020. Our calculations also showed that HLF isn’t among the 30 most popular stocks among hedge funds (click for Q3 rankings and see the video for a quick look at the top 5 stocks). At the end of this article we will also compare HLF to other stocks including Vroom, Inc. (NASDAQ:VRM), Deckers Outdoor Corp (NYSE:DECK), and BanColombia S.A. (NYSE:CIB) to get a better sense of its popularity.

In the eyes of most traders, hedge funds are viewed as worthless, outdated investment vehicles of years past. While there are greater than 8000 funds with their doors open at the moment, Our researchers hone in on the crème de la crème of this group, approximately 850 funds. It is estimated that this group of investors control the majority of the hedge fund industry’s total capital, and by keeping track of their finest equity investments, Insider Monkey has unsheathed many investment strategies that have historically outpaced Mr. Market. Insider Monkey’s flagship short hedge fund strategy exceeded the S&P 500 short ETFs by around 20 percentage points per year since its inception in March 2017. Our portfolio of short stocks lost 13% since February 2017 (through November 17th) even though the market was up 65% during the same period. We just shared a list of 6 short targets in our latest quarterly update .

At Insider Monkey we leave no stone unturned when looking for the next great investment idea. For example, the House passed a landmark bill decriminalizing marijuana. So, we are checking out this under the radar cannabis stock right now. We go through lists like the 15 best blue chip stocks to buy to pick the best large-cap stocks to buy. Even though we recommend positions in only a tiny fraction of the companies we analyze, we check out as many stocks as we can. We read hedge fund investor letters and listen to stock pitches at hedge fund conferences. You can subscribe to our free daily newsletter on our website. Keeping this in mind we’re going to check out the new hedge fund action surrounding Herbalife Nutrition Ltd. (NYSE:HLF).

Do Hedge Funds Think HLF Is A Good Stock To Buy Now? 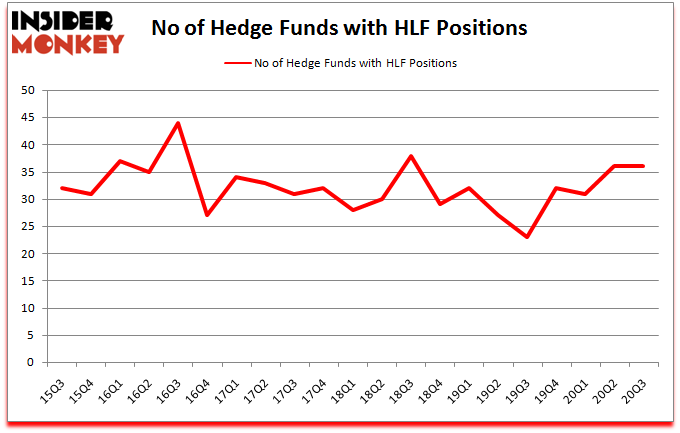 According to publicly available hedge fund and institutional investor holdings data compiled by Insider Monkey, Icahn Capital LP, managed by Carl Icahn, holds the most valuable position in Herbalife Nutrition Ltd. (NYSE:HLF). Icahn Capital LP has a $956.6 million position in the stock, comprising 5.5% of its 13F portfolio. The second most bullish fund manager is Renaissance Technologies, which holds a $512.2 million position; the fund has 0.5% of its 13F portfolio invested in the stock. Remaining professional money managers that hold long positions comprise William Duhamel’s Route One Investment Company, Vinit Bodas’s Deccan Value Advisors and John Hempton’s Bronte Capital. In terms of the portfolio weights assigned to each position Bronte Capital allocated the biggest weight to Herbalife Nutrition Ltd. (NYSE:HLF), around 16.39% of its 13F portfolio. General Equity Partners is also relatively very bullish on the stock, earmarking 15.07 percent of its 13F equity portfolio to HLF.

Since Herbalife Nutrition Ltd. (NYSE:HLF) has witnessed bearish sentiment from the aggregate hedge fund industry, we can see that there exists a select few hedge funds that decided to sell off their entire stakes heading into Q4. It’s worth mentioning that Derek C. Schrier’s Indaba Capital Management said goodbye to the biggest position of the 750 funds followed by Insider Monkey, valued at an estimated $19.5 million in stock. Dmitry Balyasny’s fund, Balyasny Asset Management, also sold off its stock, about $9.1 million worth. These transactions are interesting, as total hedge fund interest stayed the same (this is a bearish signal in our experience).

As you can see these stocks had an average of 30.4 hedge funds with bullish positions and the average amount invested in these stocks was $480 million. That figure was $2375 million in HLF’s case. Deckers Outdoor Corp (NYSE:DECK) is the most popular stock in this table. On the other hand BanColombia S.A. (NYSE:CIB) is the least popular one with only 3 bullish hedge fund positions. Herbalife Nutrition Ltd. (NYSE:HLF) is not the most popular stock in this group but hedge fund interest is still above average. Our overall hedge fund sentiment score for HLF is 61.9. Stocks with higher number of hedge fund positions relative to other stocks as well as relative to their historical range receive a higher sentiment score. This is a slightly positive signal but we’d rather spend our time researching stocks that hedge funds are piling on. Our calculations showed that top 20 most popular stocks among hedge funds returned 41.3% in 2019 and outperformed the S&P 500 ETF (SPY) by 10 percentage points. These stocks gained 33.3% in 2020 through December 18th and beat the market again by 16.4 percentage points. Unfortunately HLF wasn’t nearly as popular as these 20 stocks and hedge funds that were betting on HLF were disappointed as the stock returned 3.7% since the end of September (through 12/18) and underperformed the market. If you are interested in investing in large cap stocks with huge upside potential, you should check out the top 20 most popular stocks among hedge funds as many of these stocks already outperformed the market so far this year.

Is HLF A Good Investment Right Now?is HLF a good stock to buyNYSE:HLFSentiment Score Between 60 and 70Yahoo Finance