Is Hewlett Packard Enterprise (HPE) A Good Stock To Buy?

Is Hewlett Packard Enterprise Company (NYSE:HPE) a buy, sell, or hold? The best stock pickers are getting less bullish. The number of bullish hedge fund positions went down by 1 recently. Our calculations also showed that HPE isn’t among the 30 most popular stocks among hedge funds.

To the average investor there are several indicators stock traders employ to assess their holdings. Some of the most useful indicators are hedge fund and insider trading signals. Our researchers have shown that, historically, those who follow the best picks of the top investment managers can trounce their index-focused peers by a healthy margin (see the details here).

What have hedge funds been doing with Hewlett Packard Enterprise Company (NYSE:HPE)? 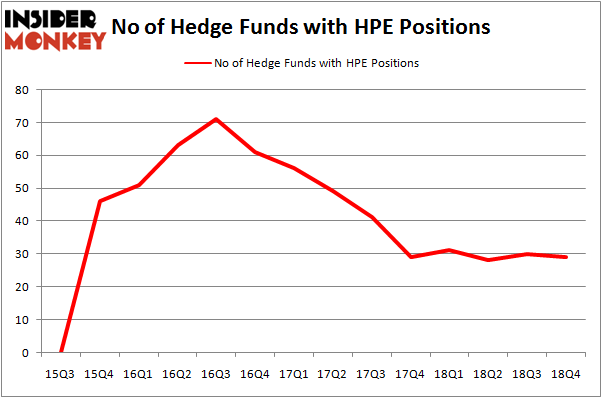 According to publicly available hedge fund and institutional investor holdings data compiled by Insider Monkey, Pzena Investment Management, managed by Richard S. Pzena, holds the number one position in Hewlett Packard Enterprise Company (NYSE:HPE). Pzena Investment Management has a $454.1 million position in the stock, comprising 2.7% of its 13F portfolio. The second most bullish fund manager is Two Sigma Advisors, managed by John Overdeck and David Siegel, which holds a $92 million position; the fund has 0.3% of its 13F portfolio invested in the stock. Other members of the smart money that hold long positions consist of Israel Englander’s Millennium Management, Mario Gabelli’s GAMCO Investors and Peter Rathjens, Bruce Clarke and John Campbell’s Arrowstreet Capital.

Since Hewlett Packard Enterprise Company (NYSE:HPE) has witnessed bearish sentiment from the smart money, logic holds that there is a sect of hedgies that decided to sell off their full holdings in the third quarter. At the top of the heap, Jonathan Barrett and Paul Segal’s Luminus Management cut the largest stake of the “upper crust” of funds tracked by Insider Monkey, valued at close to $8.2 million in stock, and Charles Lemonides’s Valueworks LLC was right behind this move, as the fund dumped about $2.1 million worth. These moves are intriguing to say the least, as aggregate hedge fund interest was cut by 1 funds in the third quarter.

As you can see these stocks had an average of 24.5 hedge funds with bullish positions and the average amount invested in these stocks was $560 million. That figure was $832 million in HPE’s case. SBA Communications Corporation (NASDAQ:SBAC) is the most popular stock in this table. On the other hand ORIX Corporation (NYSE:IX) is the least popular one with only 7 bullish hedge fund positions. Hewlett Packard Enterprise Company (NYSE:HPE) is not the most popular stock in this group but hedge fund interest is still above average. Our calculations showed that top 15 most popular stocks among hedge funds returned 19.7% through March 15th and outperformed the S&P 500 ETF (SPY) by 6.6 percentage points. Hedge funds were also right about betting on HPE as the stock returned 22.5% and outperformed the market as well.