Is Hewlett-Packard Company (HPQ) on the Path to Recovery or Ruin?

Shares of Hewlett-Packard Company (NYSE:HPQ), the world’s largest PC maker, recently surged after the company reported second quarter earnings that exceeded analyst estimates. That rally came as a relief to shareholders of the Palo Alto, Calif.-based company, which has lost over half its market value over the past five years.

During that time, Hewlett-Packard Company (NYSE:HPQ) lost its bread and butter PC business. Unexpected disruption from Apple Inc. (NASDAQ:AAPL) and Google Inc (NASDAQ:GOOG) caught it off guard, while internal troubles brought in four CEOs over the past six years. The company also made a series of disastrous and wasteful acquisitions, such as Palm, EDS and Autonomy, which undermined shareholder confidence. Lastly, it lost market share in the server business to rivals such as Dell Inc. (NASDAQ:DELL) and International Business Machines Corp. (NYSE:IBM). In other words, everything had fallen apart by the time current CEO Meg Whitman took the reins in September 2011. 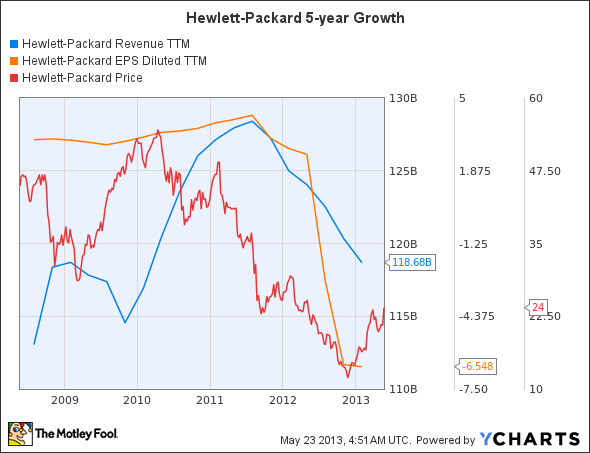 For now, though, the pain seems to have subsided. Therefore, should investors consider Hewlett-Packard Company (NYSE:HPQ)’s second quarter earnings to be a sign of improvement and an ultimate bottom, or is the company still perched atop a precarious ledge, with a long way to fall?

For its second quarter, Hewlett-Packard Company (NYSE:HPQ) earned $0.55 per share, or $1.1 billion, a 31% decline from the prior year quarter. Adjusted earnings per share came in at $0.87, topping the analyst forecast by six cents. Revenue dropped 10% year-on-year to $27.6 billion, which missed the consensus estimate of $28.12 billion.

Sales at 13 of Hewlett-Packard Company (NYSE:HPQ)’s 15 business segments fell during the quarter. Sales of notebooks and consumer PCs declined 24% and 29%, respectively. This segment makes up nearly a third of HP’s top line, and is the company’s weakest spot. Ever since Apple Inc. (NASDAQ:AAPL)’s disruptive launch of the iPad in 2008 and the subsequent flood of Google Inc (NASDAQ:GOOG) Android tablets, HP has been struggling to convince consumers to purchase traditional computers. To make matters worse, its primary rival Dell Inc. (NASDAQ:DELL), which is on the verge of going private, has been slashing its PC prices to steal market share from HP. Dell recently reported a 79% decline in first quarter profit.

HP’s server business, which comprises roughly 15% of the company’s sales, declined 12% due to aggressive eleventh hour price cuts by rival Dell. The segment showed mixed results, with its main data storage business declining 13%, but sales of more advanced data storage products rising 42%. Yet International Business Machines Corp. (NYSE:IBM)’s recent attempt to sell its server business to Lenovo, which hit a wall over pricing, suggests that there is far more to lose than gain in the hardware server business.

HP also managed to generate $3.6 billion of operating cash flow, a 44% increase from a year earlier, which suggests that cost cutting initiatives implemented last year are having the desired effect. Last year, CEO Meg Whitman stated that she was eliminating 29,000 jobs by the end of fiscal 2014 to reduce costs by $3.5 billion. Although Whitman seems to have stopped HP’s immediate bleeding, the company is still hardly on the fast track to recovery.