With the third-quarter round of 13F filings behind us it is time to take a look at the stocks in which some of the best money managers in the world preferred to invest or sell heading into the fourth quarter. One of these stocks was Herc Holdings Inc. (NYSE:HRI).

Herc Holdings Inc. (NYSE:HRI) investors should be aware of an increase in activity from the world’s largest hedge funds recently. Our calculations also showed that HRI isn’t among the 30 most popular stocks among hedge funds.

What does the smart money think about Herc Holdings Inc. (NYSE:HRI)? 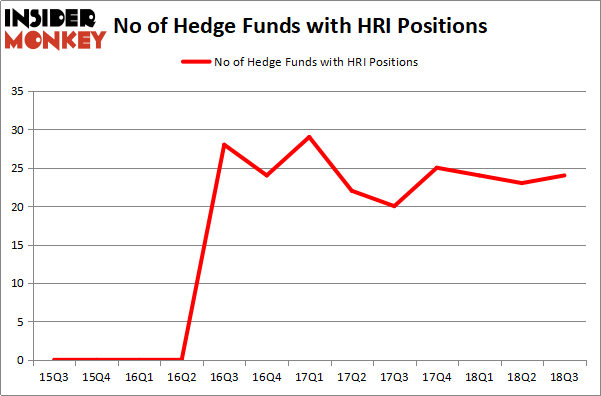 The largest stake in Herc Holdings Inc. (NYSE:HRI) was held by Icahn Capital LP, which reported holding $230.1 million worth of stock at the end of September. It was followed by GAMCO Investors with a $179.9 million position. Other investors bullish on the company included PAR Capital Management, Highfields Capital Management, and Royce & Associates.

As you can see these stocks had an average of 12.5 hedge funds with bullish positions and the average amount invested in these stocks was $161 million. That figure was $668 million in HRI’s case. Natera Inc (NASDAQ:NTRA) is the most popular stock in this table. On the other hand Tortoise Energy Infrastructure Corporation (NYSE:TYG) is the least popular one with only 3 bullish hedge fund positions. Compared to these stocks Herc Holdings Inc. (NYSE:HRI) is more popular among hedge funds. Considering that hedge funds are fond of this stock in relation to its market cap peers, it may be a good idea to analyze it in detail and potentially include it in your portfolio.