Investing in small cap stocks has historically been a way to outperform the market, as small cap companies typically grow faster on average than the blue chips. That outperformance comes with a price, however, as there are occasional periods of higher volatility. The last 12 months is one of those periods, as the Russell 2000 ETF (IWM) has underperformed the larger S&P 500 ETF (SPY) by more than 10 percentage points. Given that the funds we track tend to have a disproportionate amount of their portfolios in smaller cap stocks, they have seen some volatility in their portfolios too. Actually their moves are potentially one of the factors that contributed to this volatility. In this article, we use our extensive database of hedge fund holdings to find out what the smart money thinks of Gulf Island Fabrication, Inc. (NASDAQ:GIFI).

Is Gulf Island Fabrication, Inc. (NASDAQ:GIFI) a splendid investment today? Investors who are in the know are getting more bullish. The number of long hedge fund bets moved up by 2 recently. Our calculations also showed that GIFI isn’t among the 30 most popular stocks among hedge funds (click for Q3 rankings and see the video below for Q2 rankings).

We leave no stone unturned when looking for the next great investment idea. For example Europe is set to become the world’s largest cannabis market, so we check out this European marijuana stock pitch. One of the most bullish analysts in America just put his money where his mouth is. He says, “I’m investing more today than I did back in early 2009.” So we check out his pitch. We read hedge fund investor letters and listen to stock pitches at hedge fund conferences. We also rely on the best performing hedge funds‘ buy/sell signals. Let’s go over the fresh hedge fund action regarding Gulf Island Fabrication, Inc. (NASDAQ:GIFI).

Heading into the fourth quarter of 2019, a total of 11 of the hedge funds tracked by Insider Monkey were bullish on this stock, a change of 22% from the previous quarter. The graph below displays the number of hedge funds with bullish position in GIFI over the last 17 quarters. So, let’s check out which hedge funds were among the top holders of the stock and which hedge funds were making big moves. 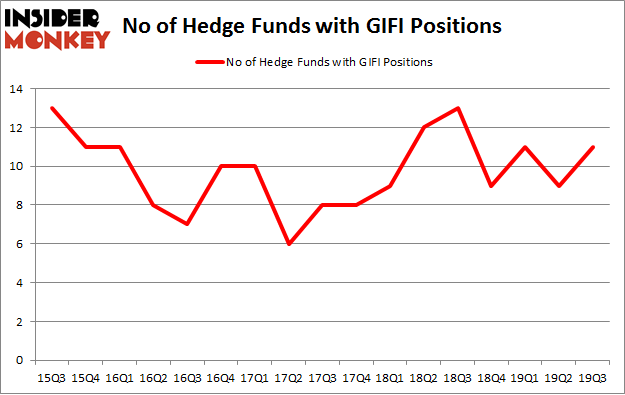 When looking at the institutional investors followed by Insider Monkey, Kokino LLC, managed by Brian Olson, holds the number one position in Gulf Island Fabrication, Inc. (NASDAQ:GIFI). Kokino LLC has a $8 million position in the stock, comprising 29.7% of its 13F portfolio. On Kokino LLC’s heels is Renaissance Technologies which holds a $1.8 million position; the fund has less than 0.1%% of its 13F portfolio invested in the stock. Some other peers that are bullish contain Chuck Royce’s Royce & Associates, Phil Frohlich’s Prescott Group Capital Management and John W. Rogers’s Ariel Investments. In terms of the portfolio weights assigned to each position Kokino LLC allocated the biggest weight to Gulf Island Fabrication, Inc. (NASDAQ:GIFI), around 29.74% of its 13F portfolio. Prescott Group Capital Management is also relatively very bullish on the stock, setting aside 0.37 percent of its 13F equity portfolio to GIFI.

Now, key hedge funds have been driving this bullishness. Paloma Partners, managed by Donald Sussman, assembled the largest position in Gulf Island Fabrication, Inc. (NASDAQ:GIFI). Paloma Partners had $0.1 million invested in the company at the end of the quarter. Gavin Saitowitz and Cisco J. del Valle’s Springbok Capital also initiated a $0 million position during the quarter.

As you can see these stocks had an average of 2.25 hedge funds with bullish positions and the average amount invested in these stocks was $4 million. That figure was $15 million in GIFI’s case. Hennessy Advisors, Inc. (NASDAQ:HNNA) is the most popular stock in this table. On the other hand Consumer Portfolio Services, Inc. (NASDAQ:CPSS) is the least popular one with only 1 bullish hedge fund positions. Compared to these stocks Gulf Island Fabrication, Inc. (NASDAQ:GIFI) is more popular among hedge funds. Our calculations showed that top 20 most popular stocks among hedge funds returned 37.4% in 2019 through the end of November and outperformed the S&P 500 ETF (SPY) by 9.9 percentage points. Unfortunately GIFI wasn’t nearly as popular as these 20 stocks and hedge funds that were betting on GIFI were disappointed as the stock returned 1.7% during the first two months of the fourth quarter and underperformed the market. If you are interested in investing in large cap stocks with huge upside potential, you should check out the top 20 most popular stocks among hedge funds as 70 percent of these stocks already outperformed the market in Q4.

Hedge Funds Have Never Been This Bullish On Radiant Logistics, Inc. (RLGT)
Monthly Newsletter Strategy
Download a free copy of our newsletter and see the details inside!
Hedge Fund Resource Center
Related News
Is Gulf Island Fabrication, Inc. (GIFI) A Good Stock To Buy? Here is What Hedge Funds Think About Gulf Island Fabrication, Inc. (GIFI) Heartland Advisors Discloses Changes in its Albany International and Gulf Island Holdings Hedge Funds Are Betting On Park-Ohio Holdings Corp. (PKOH) Is Olympic Steel, Inc. (ZEUS) Going to Burn These Hedge Funds? A M Castle and Co (CAS): Hedge Funds and Insiders Are Bullish, What Should You Do? 10 Countries with the Highest Coffee Consumption in the World 10 Stocks That Went Up During The 2008 Crash 10 Movies About Amnesia on Netflix
Billionaire Hedge Funds