Is Groupon Inc (GRPN) Going To Burn These Hedge Funds ?

Is Groupon Inc (NASDAQ:GRPN) a good investment right now? We check hedge fund and billionaire investor sentiment before delving into hours of research. Hedge funds spend millions of dollars on Ivy League graduates, expert networks, and get tips from investment bankers and industry insiders. Sure they sometimes fail miserably, but their consensus stock picks historically outperformed the market after adjusting for known risk factors.

Groupon Inc (NASDAQ:GRPN) investors should be aware of a decrease in hedge fund sentiment recently. GRPN was in 24 hedge funds’ portfolios at the end of June. There were 26 hedge funds in our database with GRPN holdings at the end of the previous quarter. Our calculations also showed that GRPN isn’t among the 30 most popular stocks among hedge funds (view the video below).

Heading into the third quarter of 2019, a total of 24 of the hedge funds tracked by Insider Monkey were bullish on this stock, a change of -8% from the previous quarter. The graph below displays the number of hedge funds with bullish position in GRPN over the last 16 quarters. With the smart money’s sentiment swirling, there exists a select group of noteworthy hedge fund managers who were boosting their stakes meaningfully (or already accumulated large positions). 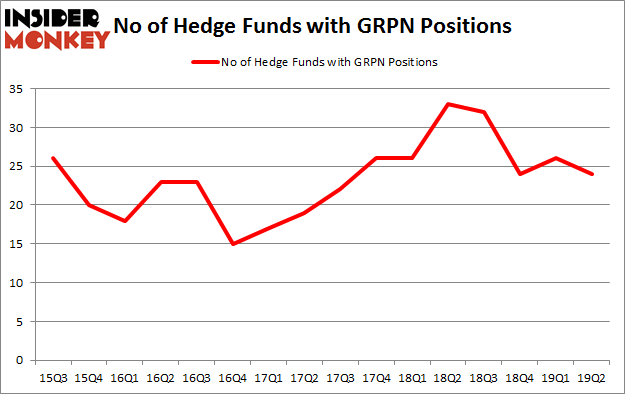 The largest stake in Groupon Inc (NASDAQ:GRPN) was held by PAR Capital Management, which reported holding $202.8 million worth of stock at the end of March. It was followed by P2 Capital Partners with a $66.5 million position. Other investors bullish on the company included Ulysses Management, D E Shaw, and Freshford Capital Management.

Due to the fact that Groupon Inc (NASDAQ:GRPN) has witnessed bearish sentiment from the aggregate hedge fund industry, logic holds that there exists a select few fund managers who sold off their full holdings in the second quarter. It’s worth mentioning that Derek C. Schrier’s Indaba Capital Management dumped the largest investment of all the hedgies monitored by Insider Monkey, comprising close to $12.5 million in stock. Douglas Dossey and Arthur Young’s fund, Tensile Capital, also dumped its stock, about $3.9 million worth. These transactions are intriguing to say the least, as total hedge fund interest fell by 2 funds in the second quarter.