Is Grifols SA (GRFS) A Good Stock To Buy ?

Out of thousands of stocks that are currently traded on the market, it is difficult to identify those that will really generate strong returns. Hedge funds and institutional investors spend millions of dollars on analysts with MBAs and PhDs, who are industry experts and well connected to other industry and media insiders on top of that. Individual investors can piggyback the hedge funds employing these talents and can benefit from their vast resources and knowledge in that way. We analyze quarterly 13F filings of nearly 750 hedge funds and, by looking at the smart money sentiment that surrounds a stock, we can determine whether it has the potential to beat the market over the long-term. Therefore, let’s take a closer look at what smart money thinks about Grifols SA (NASDAQ:GRFS).

Grifols SA (NASDAQ:GRFS) shares haven’t seen a lot of action during the first quarter. Overall, hedge fund sentiment was unchanged. The stock was in 14 hedge funds’ portfolios at the end of the first quarter of 2019. The level and the change in hedge fund popularity aren’t the only variables you need to analyze to decipher hedge funds’ perspectives. A stock may witness a boost in popularity but it may still be less popular than similarly priced stocks. That’s why at the end of this article we will examine companies such as Smith & Nephew plc (NYSE:SNN), Church & Dwight Co., Inc. (NYSE:CHD), and Expedia Group, Inc. (NASDAQ:EXPE) to gather more data points.

What have hedge funds been doing with Grifols SA (NASDAQ:GRFS)?

At Q1’s end, a total of 14 of the hedge funds tracked by Insider Monkey held long positions in this stock, a change of 0% from one quarter earlier. By comparison, 8 hedge funds held shares or bullish call options in GRFS a year ago. With the smart money’s sentiment swirling, there exists a select group of notable hedge fund managers who were boosting their holdings substantially (or already accumulated large positions). 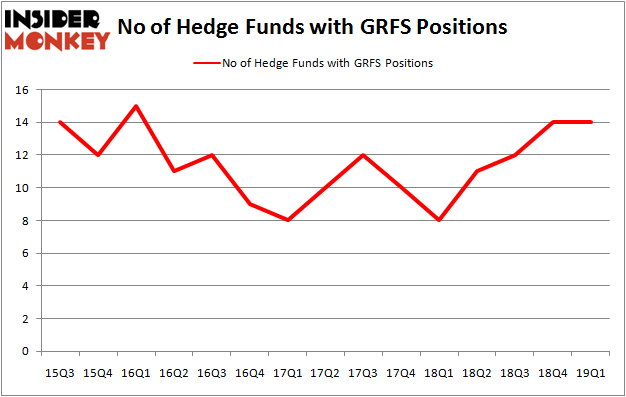 The largest stake in Grifols SA (NASDAQ:GRFS) was held by Farallon Capital, which reported holding $58.8 million worth of stock at the end of March. It was followed by Soros Fund Management with a $42.8 million position. Other investors bullish on the company included Whitebox Advisors, Arrowstreet Capital, and GLG Partners.

We view hedge fund activity in the stock unfavorable, but in this case there was only a single hedge fund selling its entire position: Stevens Capital Management. One hedge fund selling its entire position doesn’t always imply a bearish intent. Theoretically a hedge fund may decide to sell a promising position in order to invest the proceeds in a more promising idea. However, we don’t think this is the case in this case because only one of the 800+ hedge funds tracked by Insider Monkey identified as a viable investment and initiated a position in the stock (that fund was Soros Fund Management).

As you can see these stocks had an average of 22.75 hedge funds with bullish positions and the average amount invested in these stocks was $936 million. That figure was $267 million in GRFS’s case. Expedia Group, Inc (NASDAQ:EXPE) is the most popular stock in this table. On the other hand Smith & Nephew plc (NYSE:SNN) is the least popular one with only 13 bullish hedge fund positions. Grifols SA (NASDAQ:GRFS) is not the least popular stock in this group but hedge fund interest is still below average. This is a slightly negative signal and we’d rather spend our time researching stocks that hedge funds are piling on. Our calculations showed that top 20 most popular stocks among hedge funds returned 6.2% in Q2 through June 19th and outperformed the S&P 500 ETF (SPY) by nearly 3 percentage points. Unfortunately GRFS wasn’t nearly as popular as these 20 stocks (hedge fund sentiment was quite bearish); GRFS investors were disappointed as the stock returned -1.3% during the same time period and underperformed the market. If you are interested in investing in large cap stocks with huge upside potential, you should check out the top 20 most popular stocks among hedge funds as 13 of these stocks already outperformed the market so far in Q2.