Concerns over rising interest rates and expected further rate increases have hit several stocks hard during the fourth quarter of 2018. Trends reversed 180 degrees during the first half of 2019 amid Powell’s pivot and optimistic expectations towards a trade deal with China. Hedge funds and institutional investors tracked by Insider Monkey usually invest a disproportionate amount of their portfolios in smaller cap stocks. We have been receiving indications that hedge funds were increasing their overall exposure in the second quarter and this is one of the factors behind the recent movements in major indices. In this article, we will take a closer look at hedge fund sentiment towards Granite Point Mortgage Trust Inc. (NYSE:GPMT).

Granite Point Mortgage Trust Inc. (NYSE:GPMT) investors should pay attention to a decrease in enthusiasm from smart money in recent months. GPMT was in 9 hedge funds’ portfolios at the end of June. There were 12 hedge funds in our database with GPMT holdings at the end of the previous quarter. Our calculations also showed that GPMT isn’t among the 30 most popular stocks among hedge funds (see the video below).

To the average investor there are numerous tools stock traders can use to evaluate their holdings. A pair of the less known tools are hedge fund and insider trading indicators. Our experts have shown that, historically, those who follow the best picks of the top fund managers can outclass the market by a solid margin (see the details here).

At Q2’s end, a total of 9 of the hedge funds tracked by Insider Monkey held long positions in this stock, a change of -25% from the first quarter of 2019. On the other hand, there were a total of 6 hedge funds with a bullish position in GPMT a year ago. With the smart money’s sentiment swirling, there exists a few key hedge fund managers who were boosting their stakes significantly (or already accumulated large positions). 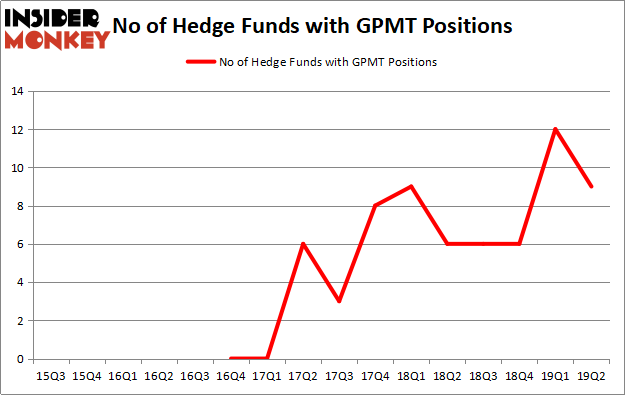 More specifically, Clough Capital Partners was the largest shareholder of Granite Point Mortgage Trust Inc. (NYSE:GPMT), with a stake worth $9.8 million reported as of the end of March. Trailing Clough Capital Partners was Renaissance Technologies, which amassed a stake valued at $5.6 million. D E Shaw, Winton Capital Management, and Balyasny Asset Management were also very fond of the stock, giving the stock large weights in their portfolios.

Because Granite Point Mortgage Trust Inc. (NYSE:GPMT) has experienced bearish sentiment from the smart money, it’s easy to see that there exists a select few money managers who were dropping their positions entirely by the end of the second quarter. It’s worth mentioning that Anand Parekh’s Alyeska Investment Group sold off the biggest investment of the 750 funds followed by Insider Monkey, comprising close to $14.9 million in stock. Andy Redleaf’s fund, Whitebox Advisors, also cut its stock, about $11.6 million worth. These moves are interesting, as total hedge fund interest was cut by 3 funds by the end of the second quarter.

As you can see these stocks had an average of 18 hedge funds with bullish positions and the average amount invested in these stocks was $184 million. That figure was $21 million in GPMT’s case. Nabors Industries Ltd. (NYSE:NBR) is the most popular stock in this table. On the other hand Quotient Technology Inc (NYSE:QUOT) is the least popular one with only 13 bullish hedge fund positions. Compared to these stocks Granite Point Mortgage Trust Inc. (NYSE:GPMT) is even less popular than QUOT. Hedge funds dodged a bullet by taking a bearish stance towards GPMT. Our calculations showed that the top 20 most popular hedge fund stocks returned 24.4% in 2019 through September 30th and outperformed the S&P 500 ETF (SPY) by 4 percentage points. Unfortunately GPMT wasn’t nearly as popular as these 20 stocks (hedge fund sentiment was very bearish); GPMT investors were disappointed as the stock returned -0.2% during the third quarter and underperformed the market. If you are interested in investing in large cap stocks with huge upside potential, you should check out the top 20 most popular stocks among hedge funds as many of these stocks already outperformed the market so far in 2019.