Is Granite Construction Incorporated (GVA) A Good Stock To Buy?

As we already know from media reports and hedge fund investor letters, many hedge funds lost money in fourth quarter, blaming macroeconomic conditions and unpredictable events that hit several sectors, with technology among them. Nevertheless, most investors decided to stick to their bullish theses and their long-term focus allows us to profit from the recent declines. In particular, let’s take a look at what hedge funds think about Granite Construction Incorporated (NYSE:GVA) in this article.

Granite Construction Incorporated (NYSE:GVA) investors should pay attention to a decrease in hedge fund sentiment in recent months. GVA was in 11 hedge funds’ portfolios at the end of the fourth quarter of 2018. There were 16 hedge funds in our database with GVA holdings at the end of the previous quarter. Our calculations also showed that gva isn’t among the 30 most popular stocks among hedge funds.

What have hedge funds been doing with Granite Construction Incorporated (NYSE:GVA)?

Heading into the first quarter of 2019, a total of 11 of the hedge funds tracked by Insider Monkey held long positions in this stock, a change of -31% from the previous quarter. On the other hand, there were a total of 16 hedge funds with a bullish position in GVA a year ago. With hedgies’ positions undergoing their usual ebb and flow, there exists an “upper tier” of key hedge fund managers who were upping their stakes substantially (or already accumulated large positions). 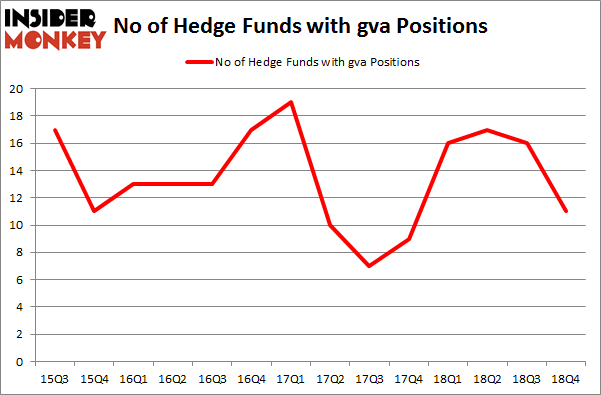 The largest stake in Granite Construction Incorporated (NYSE:GVA) was held by Royce & Associates, which reported holding $21.7 million worth of stock at the end of September. It was followed by Balyasny Asset Management with a $17.1 million position. Other investors bullish on the company included Renaissance Technologies, Wynnefield Capital, and Rutabaga Capital Management.

Due to the fact that Granite Construction Incorporated (NYSE:GVA) has witnessed a decline in interest from the smart money, logic holds that there were a few fund managers that decided to sell off their entire stakes in the third quarter. Intriguingly, Israel Englander’s Millennium Management dropped the largest stake of the “upper crust” of funds tracked by Insider Monkey, valued at about $1.5 million in stock. Matthew Tewksbury’s fund, Stevens Capital Management, also dropped its stock, about $0.7 million worth. These moves are intriguing to say the least, as aggregate hedge fund interest was cut by 5 funds in the third quarter.

As you can see these stocks had an average of 18.5 hedge funds with bullish positions and the average amount invested in these stocks was $189 million. That figure was $94 million in GVA’s case. Medpace Holdings, Inc. (NASDAQ:MEDP) is the most popular stock in this table. On the other hand Taylor Morrison Home Corp (NYSE:TMHC) is the least popular one with only 15 bullish hedge fund positions. Compared to these stocks Granite Construction Incorporated (NYSE:GVA) is even less popular than TMHC. Hedge funds dodged a bullet by taking a bearish stance towards GVA. Our calculations showed that the top 15 most popular hedge fund stocks returned 24.2% through April 22nd and outperformed the S&P 500 ETF (SPY) by more than 7 percentage points. Unfortunately GVA wasn’t nearly as popular as these 15 stock (hedge fund sentiment was very bearish); GVA investors were disappointed as the stock returned 15.1% and underperformed the market. If you are interested in investing in large cap stocks with huge upside potential, you should check out the top 15 most popular stocks) among hedge funds as 13 of these stocks already outperformed the market this year.