Is Godaddy Inc (GDDY) A Good Stock To Buy ?

The latest 13F reporting period has come and gone, and Insider Monkey is again at the forefront when it comes to making use of this gold mine of data. Insider Monkey finished processing more than 730 13F filings submitted by hedge funds and prominent investors. These filings show these funds’ portfolio positions as of June 28th, 2019. What do these smart investors think about Godaddy Inc (NYSE:GDDY)?

Godaddy Inc (NYSE:GDDY) has seen a decrease in hedge fund sentiment of late. Our calculations also showed that GDDY isn’t among the 30 most popular stocks among hedge funds (view the video below). 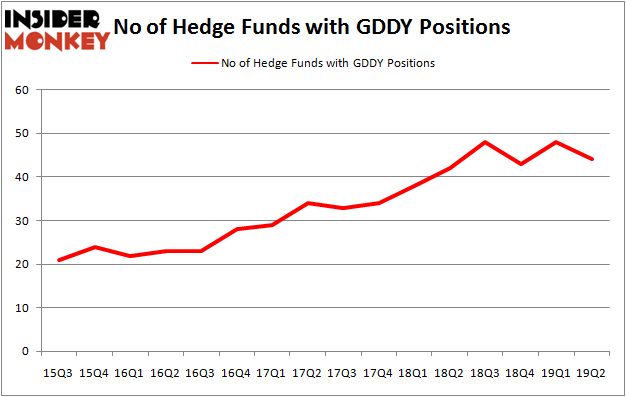 Unlike some fund managers who are betting on Dow reaching 40000 in a year, our long-short investment strategy doesn’t rely on bull markets to deliver double digit returns. We only rely on hedge fund buy/sell signals. Let’s analyze the new hedge fund action surrounding Godaddy Inc (NYSE:GDDY).

How have hedgies been trading Godaddy Inc (NYSE:GDDY)?

More specifically, Select Equity Group was the largest shareholder of Godaddy Inc (NYSE:GDDY), with a stake worth $443.7 million reported as of the end of March. Trailing Select Equity Group was Renaissance Technologies, which amassed a stake valued at $256.8 million. D E Shaw, 12 West Capital Management, and Egerton Capital Limited were also very fond of the stock, giving the stock large weights in their portfolios.

Seeing as Godaddy Inc (NYSE:GDDY) has experienced bearish sentiment from the entirety of the hedge funds we track, we can see that there is a sect of fund managers that decided to sell off their entire stakes in the second quarter. It’s worth mentioning that David Gallo’s Valinor Management LLC said goodbye to the largest stake of the “upper crust” of funds tracked by Insider Monkey, valued at about $92.5 million in stock, and Bain Capital’s Brookside Capital was right behind this move, as the fund said goodbye to about $59.3 million worth. These transactions are intriguing to say the least, as total hedge fund interest dropped by 4 funds in the second quarter.