Is Globant SA (GLOB) Going to Burn These Hedge Funds?

We know that hedge funds generate strong, risk-adjusted returns over the long run, therefore imitating the picks that they are collectively bullish on can be a profitable strategy for retail investors. With billions of dollars in assets, smart money investors have to conduct complex analyses, spend many resources and use tools that are not always available for the general crowd. This doesn’t mean that they don’t have occasional colossal losses; they do (like Peltz’s recent General Electric losses). However, it is still a good idea to keep an eye on hedge fund activity. With this in mind, as the current round of 13F filings has just ended, let’s examine the smart money sentiment towards Globant SA (NYSE:GLOB).

Globant SA (NYSE:GLOB) investors should pay attention to a decrease in enthusiasm from smart money recently. GLOB was in 14 hedge funds’ portfolios at the end of the second quarter of 2019. There were 20 hedge funds in our database with GLOB positions at the end of the previous quarter. Our calculations also showed that GLOB isn’t among the 30 most popular stocks among hedge funds (view the video below).

To most market participants, hedge funds are seen as worthless, old investment tools of years past. While there are over 8000 funds with their doors open today, Our researchers look at the bigwigs of this club, approximately 750 funds. These hedge fund managers direct the lion’s share of all hedge funds’ total capital, and by keeping track of their matchless equity investments, Insider Monkey has spotted a few investment strategies that have historically outstripped Mr. Market. Insider Monkey’s flagship hedge fund strategy defeated the S&P 500 index by around 5 percentage points a year since its inception in May 2014. We were able to generate large returns even by identifying short candidates. Our portfolio of short stocks lost 25.7% since February 2017 (through September 30th) even though the market was up more than 33% during the same period. We just shared a list of 10 short targets in our latest quarterly update .

How have hedgies been trading Globant SA (NYSE:GLOB)?

Heading into the third quarter of 2019, a total of 14 of the hedge funds tracked by Insider Monkey were bullish on this stock, a change of -30% from one quarter earlier. On the other hand, there were a total of 19 hedge funds with a bullish position in GLOB a year ago. With hedgies’ positions undergoing their usual ebb and flow, there exists a select group of noteworthy hedge fund managers who were increasing their stakes meaningfully (or already accumulated large positions). 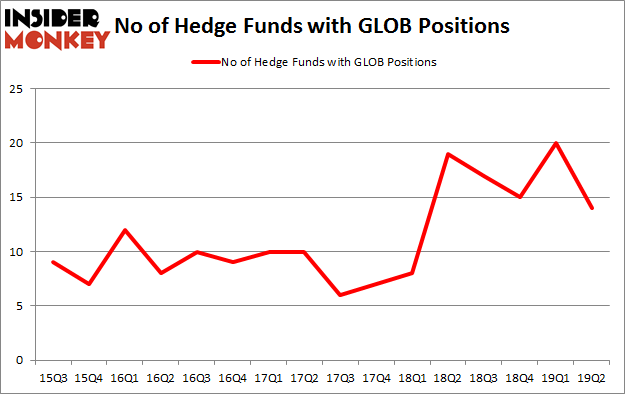 More specifically, Driehaus Capital was the largest shareholder of Globant SA (NYSE:GLOB), with a stake worth $26.1 million reported as of the end of March. Trailing Driehaus Capital was GLG Partners, which amassed a stake valued at $14.8 million. Gotham Asset Management, Sloane Robinson Investment Management, and PEAK6 Capital Management were also very fond of the stock, giving the stock large weights in their portfolios.

Because Globant SA (NYSE:GLOB) has faced declining sentiment from hedge fund managers, it’s easy to see that there exists a select few hedge funds that decided to sell off their entire stakes last quarter. It’s worth mentioning that Ben Levine, Andrew Manuel and Stefan Renold’s LMR Partners dropped the biggest position of all the hedgies tracked by Insider Monkey, totaling close to $4.6 million in stock, and Jim Simons’s Renaissance Technologies was right behind this move, as the fund said goodbye to about $3.4 million worth. These moves are intriguing to say the least, as total hedge fund interest was cut by 6 funds last quarter.

As you can see these stocks had an average of 22 hedge funds with bullish positions and the average amount invested in these stocks was $218 million. That figure was $63 million in GLOB’s case. Transocean Ltd (NYSE:RIG) is the most popular stock in this table. On the other hand United Bankshares, Inc. (NASDAQ:UBSI) is the least popular one with only 14 bullish hedge fund positions. Compared to these stocks Globant SA (NYSE:GLOB) is even less popular than UBSI. Hedge funds dodged a bullet by taking a bearish stance towards GLOB. Our calculations showed that the top 20 most popular hedge fund stocks returned 24.4% in 2019 through September 30th and outperformed the S&P 500 ETF (SPY) by 4 percentage points. Unfortunately GLOB wasn’t nearly as popular as these 20 stocks (hedge fund sentiment was very bearish); GLOB investors were disappointed as the stock returned -9.4% during the third quarter and underperformed the market. If you are interested in investing in large cap stocks with huge upside potential, you should check out the top 20 most popular stocks among hedge funds as many of these stocks already outperformed the market so far in 2019.

Is Teradata Corporation (TDC) Going To Burn These Hedge Funds ?
Monthly Newsletter Strategy
Download a free copy of our newsletter and see the details inside!
Hedge Fund Resource Center
Related News
Globant SA (GLOB): Are Hedge Funds Right About This Stock? Is Globant SA (GLOB) A Good Stock To Buy? Do Hedge Funds Love Globant SA (GLOB)? 11 Largest Auto Insurance Companies In The US In 2019 10 Poorest Cities in America in 2019 8 Lowest Tar and Nicotine Cigarette Brands in 2019
Billionaire Hedge Funds