It seems that the masses and most of the financial media hate hedge funds and what they do, but why is this hatred of hedge funds so prominent? At the end of the day, these asset management firms do not gamble the hard-earned money of the people who are on the edge of poverty. Truth be told, most hedge fund managers and other smaller players within this industry are very smart and skilled investors. Of course, they may also make wrong bets in some instances, but no one knows what the future holds and how market participants will react to the bountiful news that floods in each day. The Standard and Poor’s 500 Index returned approximately 5.7% in the 12 months ending October 26 (including dividend payments). Conversely, hedge funds’ 30 preferred S&P 500 stocks (as of June 2018) generated a return of 15.1% during the same 12-month period, with 53% of these stock picks outperforming the broader market benchmark. Coincidence? It might happen to be so, but it is unlikely. Our research covering the last 18 years indicates that hedge funds’ stock picks generate superior risk-adjusted returns. That’s why we believe it isn’t a waste of time to check out hedge fund sentiment before you invest in a stock like Globalstar, Inc. (NYSE:GSAT).

Globalstar, Inc. (NYSE:GSAT) was in 22 hedge funds’ portfolios at the end of September. GSAT investors should be aware of an increase in support from the world’s most elite money managers in recent months. There were 19 hedge funds in our database with GSAT positions at the end of the previous quarter. Our calculations also showed that GSAT isn’t among the 30 most popular stocks among hedge funds.

To the average investor there are many formulas shareholders use to evaluate stocks. Two of the most underrated formulas are hedge fund and insider trading interest. Our researchers have shown that, historically, those who follow the top picks of the best fund managers can outperform the broader indices by a solid amount (see the details here).

Heading into the fourth quarter of 2018, a total of 22 of the hedge funds tracked by Insider Monkey were bullish on this stock, a change of 16% from one quarter earlier. The graph below displays the number of hedge funds with bullish position in GSAT over the last 13 quarters. With the smart money’s sentiment swirling, there exists a select group of key hedge fund managers who were upping their stakes considerably (or already accumulated large positions). 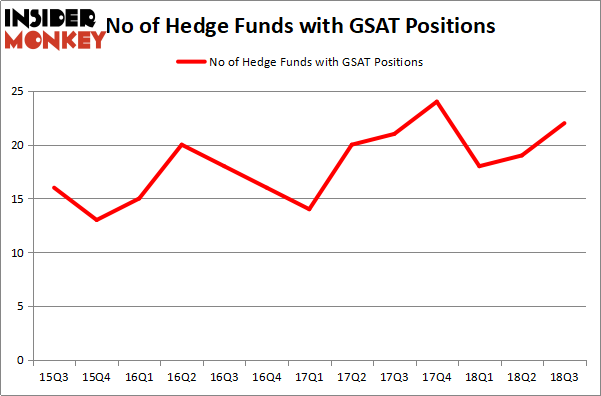 As industrywide interest jumped, key hedge funds have been driving this bullishness. 683 Capital Partners, managed by Ari Zweiman, initiated the most outsized position in Globalstar, Inc. (NYSE:GSAT). 683 Capital Partners had $2 million invested in the company at the end of the quarter. Steve Ketchum’s Sound Point Capital also made a $1 million investment in the stock during the quarter. The following funds were also among the new GSAT investors: John Orrico’s Water Island Capital and Joel Greenblatt’s Gotham Asset Management.

As you can see these stocks had an average of 10.75 hedge funds with bullish positions and the average amount invested in these stocks was $127 million. That figure was $106 million in GSAT’s case. Heidrick & Struggles International, Inc. (NASDAQ:HSII) is the most popular stock in this table. On the other hand Secoo Holding Limited (NASDAQ:SECO) is the least popular one with only 5 bullish hedge fund positions. Compared to these stocks Globalstar, Inc. (NYSE:GSAT) is more popular among hedge funds. Considering that hedge funds are fond of this stock in relation to its market cap peers, it may be a good idea to analyze it in detail and potentially include it in your portfolio.

Hedge Funds Are Betting On ON Semiconductor Corporation (ON)
Monthly Newsletter Strategy
Download a free copy of our newsletter and see the details inside!
Hedge Fund Resource Center
Related News
After Straight Path (STRP), is GlobalStar (GSAT) Next in Line for a Buyout? What’s Going On In The Finance World Today? Is Globalstar, Inc. (GSAT) a Good Stock to Buy? Five Reasons You Need a Day-Trading Mentor 15 Most Important Medical Discoveries of 2018 The 10 Best Islands to Visit in 2019
Billionaire Hedge Funds