Is Global Payments Inc (GPN) A Good Stock To Buy?

Insider Monkey has processed numerous 13F filings of hedge funds and successful value investors to create an extensive database of hedge fund holdings. The 13F filings show the hedge funds’ and successful investors’ positions as of the end of the first quarter. You can find articles about an individual hedge fund’s trades on numerous financial news websites. However, in this article we will take a look at their collective moves over the last 4.5 years and analyze what the smart money thinks of Global Payments Inc (NYSE:GPN) based on that data.

Is Global Payments Inc (NYSE:GPN) going to take off soon? Hedge funds are buying. The number of bullish hedge fund bets inched up by 3 lately. Our calculations also showed that GPN isn’t among the 30 most popular stocks among hedge funds (click for Q1 rankings and see the video for a quick look at the top 5 stocks). GPN was in 67 hedge funds’ portfolios at the end of the first quarter of 2020. There were 64 hedge funds in our database with GPN positions at the end of the previous quarter.

At Insider Monkey we leave no stone unturned when looking for the next great investment idea. For example, Europe is set to become the world’s largest cannabis market, so we checked out this European marijuana stock pitch. Also, we are still not out of the woods in terms of the coronavirus pandemic. So, we checked out this analyst’s “corona catalyst plays“.  We read hedge fund investor letters and listen to stock pitches at hedge fund conferences. Our best call in 2020 was shorting the market when the S&P 500 was trading at 3150 after realizing the coronavirus pandemic’s significance before most investors. Now let’s review the fresh hedge fund action regarding Global Payments Inc (NYSE:GPN).

At the end of the first quarter, a total of 67 of the hedge funds tracked by Insider Monkey held long positions in this stock, a change of 5% from the previous quarter. The graph below displays the number of hedge funds with bullish position in GPN over the last 18 quarters. With the smart money’s capital changing hands, there exists an “upper tier” of noteworthy hedge fund managers who were boosting their holdings substantially (or already accumulated large positions). 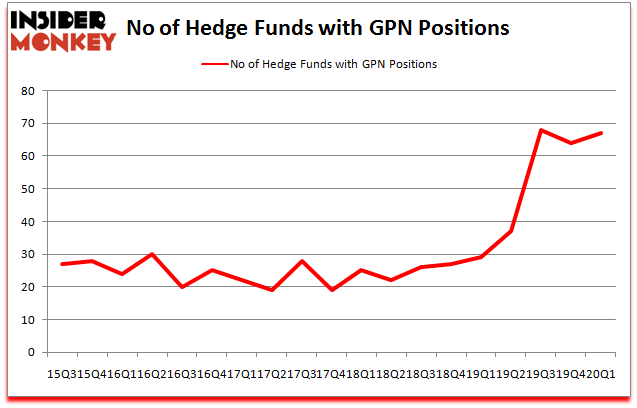 Among these funds, Lone Pine Capital held the most valuable stake in Global Payments Inc (NYSE:GPN), which was worth $714.6 million at the end of the third quarter. On the second spot was Coatue Management which amassed $270.5 million worth of shares. Alkeon Capital Management, Steadfast Capital Management, and Palestra Capital Management were also very fond of the stock, becoming one of the largest hedge fund holders of the company. In terms of the portfolio weights assigned to each position Value Holdings LP allocated the biggest weight to Global Payments Inc (NYSE:GPN), around 13.75% of its 13F portfolio. Azora Capital is also relatively very bullish on the stock, setting aside 10.48 percent of its 13F equity portfolio to GPN.

As aggregate interest increased, key money managers were leading the bulls’ herd. Value Holdings LP, managed by Tim Curro, established the biggest position in Global Payments Inc (NYSE:GPN). Value Holdings LP had $28.9 million invested in the company at the end of the quarter. Ravi Chopra’s Azora Capital also made a $27.1 million investment in the stock during the quarter. The other funds with new positions in the stock are Parsa Kiai’s Steamboat Capital Partners, David Fiszel’s Honeycomb Asset Management, and Dennis Puri and Oliver Keller’s Hunt Lane Capital.

Let’s also examine hedge fund activity in other stocks – not necessarily in the same industry as Global Payments Inc (NYSE:GPN) but similarly valued. We will take a look at The Charles Schwab Corporation (NYSE:SCHW), The Progressive Corporation (NYSE:PGR), Vale SA (NYSE:VALE), and The Sherwin-Williams Company (NYSE:SHW). This group of stocks’ market valuations are similar to GPN’s market valuation.

As you can see these stocks had an average of 49.5 hedge funds with bullish positions and the average amount invested in these stocks was $1759 million. That figure was $2155 million in GPN’s case. The Charles Schwab Corporation (NYSE:SCHW) is the most popular stock in this table. On the other hand Vale SA (NYSE:VALE) is the least popular one with only 28 bullish hedge fund positions. Compared to these stocks Global Payments Inc (NYSE:GPN) is more popular among hedge funds. Our calculations showed that top 10 most popular stocks among hedge funds returned 41.4% in 2019 and outperformed the S&P 500 ETF (SPY) by 10.1 percentage points. These stocks returned 7.9% in 2020 through May 22nd but still managed to beat the market by 15.6 percentage points. Hedge funds were also right about betting on GPN as the stock returned 22.5% so far in Q2 (through May 22nd) and outperformed the market by an even larger margin. Hedge funds were clearly right about piling into this stock relative to other stocks with similar market capitalizations.