Is Gladstone Commercial Corporation (GOOD) A Good Stock To Buy?

We at Insider Monkey have gone over 730 13F filings that hedge funds and prominent investors are required to file by the SEC The 13F filings show the funds’ and investors’ portfolio positions as of June 28th. In this article, we look at what those funds think of Gladstone Commercial Corporation (NASDAQ:GOOD) based on that data.

Is Gladstone Commercial Corporation (NASDAQ:GOOD) a buy, sell, or hold? Investors who are in the know are becoming less hopeful. The number of long hedge fund positions dropped by 1 recently. Our calculations also showed that GOOD isn’t among the 30 most popular stocks among hedge funds (see the video below). GOOD was in 5 hedge funds’ portfolios at the end of the second quarter of 2019. There were 6 hedge funds in our database with GOOD positions at the end of the previous quarter.

If you’d ask most stock holders, hedge funds are viewed as unimportant, old investment tools of yesteryear. While there are over 8000 funds trading at the moment, We look at the leaders of this club, approximately 750 funds. These hedge fund managers control the majority of all hedge funds’ total asset base, and by tracking their matchless equity investments, Insider Monkey has unearthed several investment strategies that have historically outpaced the S&P 500 index. Insider Monkey’s flagship hedge fund strategy outstripped the S&P 500 index by around 5 percentage points annually since its inception in May 2014. We were able to generate large returns even by identifying short candidates. Our portfolio of short stocks lost 25.7% since February 2017 (through September 30th) even though the market was up more than 33% during the same period. We just shared a list of 10 short targets in our latest quarterly update . 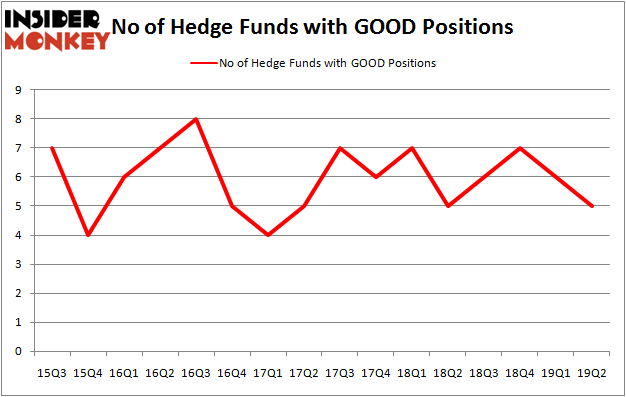 What does smart money think about Gladstone Commercial Corporation (NASDAQ:GOOD)?

At the end of the second quarter, a total of 5 of the hedge funds tracked by Insider Monkey held long positions in this stock, a change of -17% from the first quarter of 2019. The graph below displays the number of hedge funds with bullish position in GOOD over the last 16 quarters. With the smart money’s capital changing hands, there exists a select group of key hedge fund managers who were boosting their holdings substantially (or already accumulated large positions).

Of the funds tracked by Insider Monkey, Renaissance Technologies has the most valuable position in Gladstone Commercial Corporation (NASDAQ:GOOD), worth close to $54.4 million, accounting for less than 0.1%% of its total 13F portfolio. Sitting at the No. 2 spot is Millennium Management, managed by Israel Englander, which holds a $9.6 million position; the fund has less than 0.1%% of its 13F portfolio invested in the stock. Other professional money managers that hold long positions comprise John Overdeck and David Siegel’s Two Sigma Advisors, Ken Griffin’s Citadel Investment Group and Ken Griffin’s Citadel Investment Group.

We view hedge fund activity in the stock unfavorable, but in this case there was only a single hedge fund selling its entire position: PEAK6 Capital Management. One hedge fund selling its entire position doesn’t always imply a bearish intent. Theoretically a hedge fund may decide to sell a promising position in order to invest the proceeds in a more promising idea. However, we don’t think this is the case in this case because none of the 750+ hedge funds tracked by Insider Monkey identified GOOD as a viable investment and initiated a position in the stock.

As you can see these stocks had an average of 8.5 hedge funds with bullish positions and the average amount invested in these stocks was $44 million. That figure was $70 million in GOOD’s case. Retail Value Inc. (NYSE:RVI) is the most popular stock in this table. On the other hand eXp World Holdings, Inc. (NASDAQ:EXPI) is the least popular one with only 2 bullish hedge fund positions. Gladstone Commercial Corporation (NASDAQ:GOOD) is not the least popular stock in this group but hedge fund interest is still below average. Our calculations showed that top 20 most popular stocks among hedge funds returned 24.4% in 2019 through September 30th and outperformed the S&P 500 ETF (SPY) by 4 percentage points. A small number of hedge funds were also right about betting on GOOD as the stock returned 12.6% during the same time frame and outperformed the market by an even larger margin.