Is Gerdau SA (GGB) A Good Stock To Buy?

We are still in an overall bull market and many stocks that smart money investors were piling into surged through October 17th. Among them, Facebook and Microsoft ranked among the top 3 picks and these stocks gained 45% and 39% respectively. Hedge funds’ top 3 stock picks returned 34.4% this year and beat the S&P 500 ETFs by 13 percentage points. Investing in index funds guarantees you average returns, not superior returns. We are looking to generate superior returns for our readers. That’s why we believe it isn’t a waste of time to check out hedge fund sentiment before you invest in a stock like Gerdau SA (NYSE:GGB).

Is Gerdau SA (NYSE:GGB) a buy here? Hedge funds are becoming less hopeful. The number of long hedge fund positions decreased by 3 in recent months. Our calculations also showed that GGB isn’t among the 30 most popular stocks among hedge funds (see the video below).

Unlike former hedge manager, Dr. Steve Sjuggerud, who is convinced Dow will soar past 40000, our long-short investment strategy doesn’t rely on bull markets to deliver double digit returns. We only rely on hedge fund buy/sell signals. We’re going to go over the new hedge fund action regarding Gerdau SA (NYSE:GGB).

At Q2’s end, a total of 7 of the hedge funds tracked by Insider Monkey were long this stock, a change of -30% from one quarter earlier. On the other hand, there were a total of 20 hedge funds with a bullish position in GGB a year ago. With hedgies’ positions undergoing their usual ebb and flow, there exists a select group of noteworthy hedge fund managers who were adding to their stakes considerably (or already accumulated large positions). 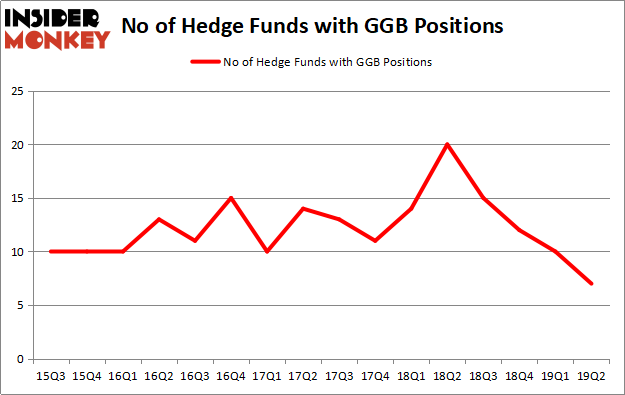 Among these funds, Contrarian Capital held the most valuable stake in Gerdau SA (NYSE:GGB), which was worth $83 million at the end of the second quarter. On the second spot was Contrarian Capital which amassed $29 million worth of shares. Moreover, Fisher Asset Management, Citadel Investment Group, and PEAK6 Capital Management were also bullish on Gerdau SA (NYSE:GGB), allocating a large percentage of their portfolios to this stock.

Since Gerdau SA (NYSE:GGB) has experienced a decline in interest from the aggregate hedge fund industry, it’s safe to say that there exists a select few funds that elected to cut their full holdings in the second quarter. Intriguingly, Noam Gottesman’s GLG Partners said goodbye to the biggest position of the “upper crust” of funds followed by Insider Monkey, valued at close to $37.6 million in stock, and Ken Heebner’s Capital Growth Management was right behind this move, as the fund dumped about $26.8 million worth. These bearish behaviors are interesting, as total hedge fund interest dropped by 3 funds in the second quarter.

As you can see these stocks had an average of 14.5 hedge funds with bullish positions and the average amount invested in these stocks was $335 million. That figure was $117 million in GGB’s case. Newell Brands Inc. (NASDAQ:NWL) is the most popular stock in this table. On the other hand Brookfield Renewable Partners L.P. (NYSE:BEP) is the least popular one with only 4 bullish hedge fund positions. Gerdau SA (NYSE:GGB) is not the least popular stock in this group but hedge fund interest is still below average. This is a slightly negative signal and we’d rather spend our time researching stocks that hedge funds are piling on. Our calculations showed that top 20 most popular stocks among hedge funds returned 24.4% in 2019 through September 30th and outperformed the S&P 500 ETF (SPY) by 4 percentage points. Unfortunately GGB wasn’t nearly as popular as these 20 stocks (hedge fund sentiment was quite bearish); GGB investors were disappointed as the stock returned -18.6% during the third quarter and underperformed the market. If you are interested in investing in large cap stocks with huge upside potential, you should check out the top 20 most popular stocks among hedge funds as many of these stocks already outperformed the market so far in 2019.

Medpace Holdings, Inc. (MEDP): These Hedge Funds Cashed Out Too Early
Monthly Newsletter Strategy
Download a free copy of our newsletter and see the details inside!
Hedge Fund Resource Center
Related News
Here’s What Hedge Funds Think About Gerdau SA (GGB) Here’s What Hedge Funds Think About Gerdau SA (GGB) How Gerdau SA (ADR) (GGB) Stacks Up Against Its Peers? Contrarian Capital’s Stock Picks Like American Airlines Group Inc (AAL) Have a Positive Impact on Its Returns Deutsche Bank Fine Hits Credit Suisse and RBS Hard, Plus 3 Other Stocks That Are Getting Beaten Down Today Distressed Securities-Focused Investor Bought These Five Stocks; Should You Follow? What Is Going On With These 5 Falling Stocks? 11 Largest Auto Insurance Companies In The US In 2019 10 Poorest Cities in America in 2019 8 Lowest Tar and Nicotine Cigarette Brands in 2019
Billionaire Hedge Funds