We at Insider Monkey have gone over 700 13F filings that hedge funds and prominent investors are required to file by the SEC. The 13F filings show the funds’ and investors’ portfolio positions as of September 30th. In this article we look at what those investors think of Gentherm Inc (NASDAQ:THRM).

Gentherm Inc (NASDAQ:THRM) investors should be aware of a decrease in activity from the world’s largest hedge funds lately. THRM was in 13 hedge funds’ portfolios at the end of September. There were 14 hedge funds in our database with THRM positions at the end of the previous quarter. Our calculations also showed that THRM isn’t among the 30 most popular stocks among hedge funds.

At the end of the third quarter, a total of 13 of the hedge funds tracked by Insider Monkey were bullish on this stock, a change of -7% from the second quarter of 2018. On the other hand, there were a total of 12 hedge funds with a bullish position in THRM at the beginning of this year. With the smart money’s capital changing hands, there exists an “upper tier” of key hedge fund managers who were increasing their holdings considerably (or already accumulated large positions). 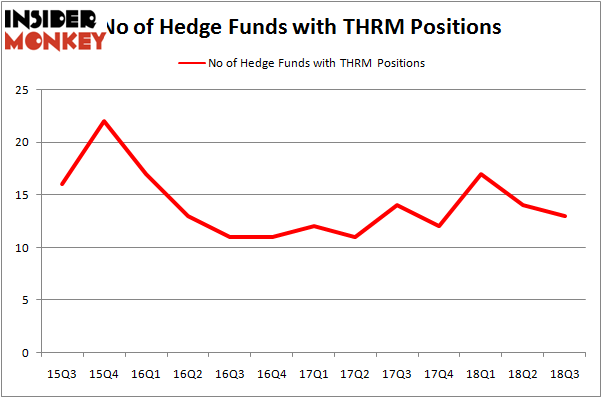 According to Insider Monkey’s hedge fund database, Douglas T. Granat’s Trigran Investments has the largest position in Gentherm Inc (NASDAQ:THRM), worth close to $49.9 million, amounting to 10.3% of its total 13F portfolio. The second largest stake is held by Marcato Capital Management, managed by Richard McGuire, which holds a $16.2 million position; the fund has 1.8% of its 13F portfolio invested in the stock. Some other members of the smart money that hold long positions include Eli Cohen’s Crescent Park Management, Richard S. Meisenberg’s ACK Asset Management and Ken Griffin’s Citadel Investment Group.

Due to the fact that Gentherm Inc (NASDAQ:THRM) has witnessed falling interest from the smart money, logic holds that there is a sect of hedgies that elected to cut their full holdings last quarter. Intriguingly, David Brown’s Hawk Ridge Management sold off the largest position of the 700 funds watched by Insider Monkey, comprising an estimated $7.5 million in stock, and Jeffrey Bronchick’s Cove Street Capital was right behind this move, as the fund dropped about $0.8 million worth. These moves are interesting, as aggregate hedge fund interest fell by 1 funds last quarter.

As you can see these stocks had an average of 11.5 hedge funds with bullish positions and the average amount invested in these stocks was $61 million. That figure was $104 million in THRM’s case. Park National Corporation (NYSE:PRK) is the most popular stock in this table. On the other hand HFF, Inc. (NYSE:HF) is the least popular one with only 10 bullish hedge fund positions. Compared to these stocks Gentherm Inc (NASDAQ:THRM) is more popular among hedge funds. Considering that hedge funds are fond of this stock in relation to its market cap peers, it may be a good idea to analyze it in detail and potentially include it in your portfolio.