How do you pick the next stock to invest in? One way would be to spend days of research browsing through thousands of publicly traded companies. However, an easier way is to look at the stocks that smart money investors are collectively bullish on. Hedge funds and other institutional investors usually invest large amounts of capital and have to conduct due diligence while choosing their next pick. They don’t always get it right, but, on average, their stock picks historically generated strong returns after adjusting for known risk factors. With this in mind, let’s take a look at the recent hedge fund activity surrounding Gentex Corporation (NASDAQ:GNTX).

Gentex Corporation (NASDAQ:GNTX) shares haven’t seen a lot of action during the second quarter. Overall, hedge fund sentiment was unchanged. The stock was in 23 hedge funds’ portfolios at the end of June. The level and the change in hedge fund popularity aren’t the only variables you need to analyze to decipher hedge funds’ perspectives. A stock may witness a boost in popularity but it may still be less popular than similarly priced stocks. That’s why at the end of this article we will examine companies such as Phillips 66 Partners LP (NYSE:PSXP), Morningstar, Inc. (NASDAQ:MORN), and Mellanox Technologies, Ltd. (NASDAQ:MLNX) to gather more data points. Our calculations also showed that GNTX isn’t among the 30 most popular stocks among hedge funds (view the video below). 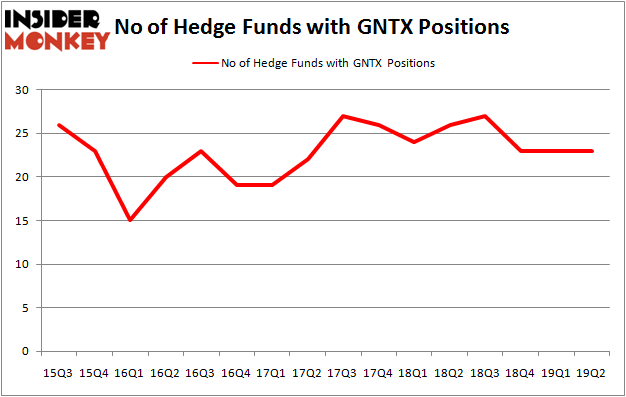 Unlike some fund managers who are betting on Dow reaching 40000 in a year, our long-short investment strategy doesn’t rely on bull markets to deliver double digit returns. We only rely on hedge fund buy/sell signals. We’re going to analyze the fresh hedge fund action surrounding Gentex Corporation (NASDAQ:GNTX).

At Q2’s end, a total of 23 of the hedge funds tracked by Insider Monkey were bullish on this stock, a change of 0% from the first quarter of 2019. By comparison, 26 hedge funds held shares or bullish call options in GNTX a year ago. With the smart money’s sentiment swirling, there exists an “upper tier” of noteworthy hedge fund managers who were upping their holdings significantly (or already accumulated large positions).

According to Insider Monkey’s hedge fund database, Phill Gross and Robert Atchinson’s Adage Capital Management has the most valuable position in Gentex Corporation (NASDAQ:GNTX), worth close to $119.4 million, accounting for 0.3% of its total 13F portfolio. The second largest stake is held by Nitorum Capital, managed by Seth Rosen, which holds a $98.8 million position; 5.6% of its 13F portfolio is allocated to the company. Some other professional money managers that hold long positions encompass Chuck Royce’s Royce & Associates, Steve Cohen’s Point72 Asset Management and Renaissance Technologies.

Due to the fact that Gentex Corporation (NASDAQ:GNTX) has experienced falling interest from the smart money, logic holds that there is a sect of fund managers who were dropping their full holdings by the end of the second quarter. Interestingly, Matthew Tewksbury’s Stevens Capital Management dropped the biggest investment of the 750 funds followed by Insider Monkey, totaling close to $2.1 million in stock, and Mark Broach’s Manatuck Hill Partners was right behind this move, as the fund sold off about $0.4 million worth. These transactions are important to note, as aggregate hedge fund interest stayed the same (this is a bearish signal in our experience).

As you can see these stocks had an average of 22 hedge funds with bullish positions and the average amount invested in these stocks was $574 million. That figure was $388 million in GNTX’s case. Mellanox Technologies, Ltd. (NASDAQ:MLNX) is the most popular stock in this table. On the other hand Phillips 66 Partners LP (NYSE:PSXP) is the least popular one with only 3 bullish hedge fund positions. Gentex Corporation (NASDAQ:GNTX) is not the most popular stock in this group but hedge fund interest is still above average. Our calculations showed that top 20 most popular stocks among hedge funds returned 24.4% in 2019 through September 30th and outperformed the S&P 500 ETF (SPY) by 4 percentage points. Hedge funds were also right about betting on GNTX as the stock returned 12.4% during the third quarter and outperformed the market. Hedge funds were rewarded for their relative bullishness.