We know that hedge funds generate strong, risk-adjusted returns over the long run, therefore imitating the picks that they are collectively bullish on can be a profitable strategy for retail investors. With billions of dollars in assets, smart money investors have to conduct complex analyses, spend many resources and use tools that are not always available for the general crowd. This doesn’t mean that they don’t have occasional colossal losses; they do (like Peltz’s recent General Electric losses). However, it is still a good idea to keep an eye on hedge fund activity. With this in mind, as the current round of 13F filings has just ended, let’s examine the smart money sentiment towards Genesis Energy, L.P. (NYSE:GEL).

Genesis Energy, L.P. (NYSE:GEL) has seen an increase in enthusiasm from smart money lately. GEL was in 4 hedge funds’ portfolios at the end of the second quarter of 2019. There were 3 hedge funds in our database with GEL holdings at the end of the previous quarter. Our calculations also showed that GEL isn’t among the 30 most popular stocks among hedge funds (view the video below).

If you’d ask most shareholders, hedge funds are viewed as slow, outdated investment tools of the past. While there are greater than 8000 funds in operation at the moment, Our experts look at the moguls of this club, approximately 750 funds. It is estimated that this group of investors oversee the majority of the smart money’s total capital, and by tailing their highest performing picks, Insider Monkey has found a few investment strategies that have historically defeated the broader indices. Insider Monkey’s flagship hedge fund strategy surpassed the S&P 500 index by around 5 percentage points annually since its inception in May 2014. We were able to generate large returns even by identifying short candidates. Our portfolio of short stocks lost 25.7% since February 2017 (through September 30th) even though the market was up more than 33% during the same period. We just shared a list of 10 short targets in our latest quarterly update .

What have hedge funds been doing with Genesis Energy, L.P. (NYSE:GEL)?

Heading into the third quarter of 2019, a total of 4 of the hedge funds tracked by Insider Monkey were bullish on this stock, a change of 33% from one quarter earlier. Below, you can check out the change in hedge fund sentiment towards GEL over the last 16 quarters. With the smart money’s sentiment swirling, there exists an “upper tier” of noteworthy hedge fund managers who were increasing their stakes meaningfully (or already accumulated large positions). 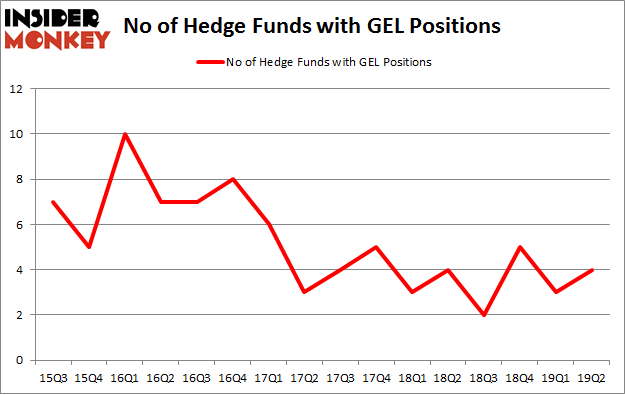 According to Insider Monkey’s hedge fund database, Arrowstreet Capital, managed by Peter Rathjens, Bruce Clarke and John Campbell, holds the largest position in Genesis Energy, L.P. (NYSE:GEL). Arrowstreet Capital has a $20.7 million position in the stock, comprising less than 0.1%% of its 13F portfolio. Coming in second is Citadel Investment Group, managed by Ken Griffin, which holds a $4.4 million position; the fund has less than 0.1%% of its 13F portfolio invested in the stock. Remaining members of the smart money that are bullish comprise Perella Weinberg Partners, Robert B. Gillam’s McKinley Capital Management and Ken Griffin’s Citadel Investment Group.

Let’s go over hedge fund activity in other stocks – not necessarily in the same industry as Genesis Energy, L.P. (NYSE:GEL) but similarly valued. We will take a look at Herman Miller, Inc. (NASDAQ:MLHR), PTC Therapeutics, Inc. (NASDAQ:PTCT), Crestwood Equity Partners LP (NYSE:CEQP), and Pampa Energia S.A. (NYSE:PAM). All of these stocks’ market caps are closest to GEL’s market cap.

As you can see these stocks had an average of 17.25 hedge funds with bullish positions and the average amount invested in these stocks was $298 million. That figure was $30 million in GEL’s case. PTC Therapeutics, Inc. (NASDAQ:PTCT) is the most popular stock in this table. On the other hand Crestwood Equity Partners LP (NYSE:CEQP) is the least popular one with only 4 bullish hedge fund positions. Compared to these stocks Genesis Energy, L.P. (NYSE:GEL) is even less popular than CEQP. Hedge funds dodged a bullet by taking a bearish stance towards GEL. Our calculations showed that the top 20 most popular hedge fund stocks returned 24.4% in 2019 through September 30th and outperformed the S&P 500 ETF (SPY) by 4 percentage points. Unfortunately GEL wasn’t nearly as popular as these 20 stocks (hedge fund sentiment was very bearish); GEL investors were disappointed as the stock returned 0.4% during the third quarter and underperformed the market. If you are interested in investing in large cap stocks with huge upside potential, you should check out the top 20 most popular stocks among hedge funds as many of these stocks already outperformed the market so far in 2019.