How do you pick the next stock to invest in? One way would be to spend hours of research browsing through thousands of publicly traded companies. However, an easier way is to look at the stocks that smart money investors are collectively bullish on. Hedge funds and other institutional investors usually invest large amounts of capital and have to conduct due diligence while choosing their next pick. They don’t always get it right, but, on average, their stock picks historically generated strong returns after adjusting for known risk factors. With this in mind, let’s take a look at the recent hedge fund activity surrounding General American Investors, Inc. (NYSE:GAM).

Is General American Investors, Inc. (NYSE:GAM) an outstanding stock to buy now? Money managers are turning bullish. The number of long hedge fund positions increased by 1 in recent months. Our calculations also showed that GAM isn’t among the 30 most popular stocks among hedge funds. GAM was in 6 hedge funds’ portfolios at the end of December. There were 5 hedge funds in our database with GAM holdings at the end of the previous quarter.

What have hedge funds been doing with General American Investors, Inc. (NYSE:GAM)?

At Q4’s end, a total of 6 of the hedge funds tracked by Insider Monkey held long positions in this stock, a change of 20% from the previous quarter. On the other hand, there were a total of 4 hedge funds with a bullish position in GAM a year ago. With the smart money’s positions undergoing their usual ebb and flow, there exists a few notable hedge fund managers who were adding to their holdings substantially (or already accumulated large positions). 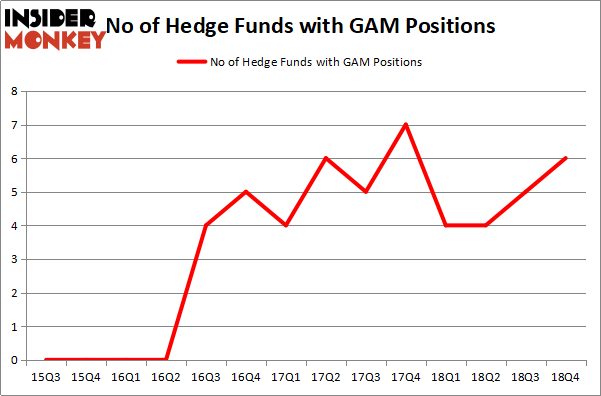 More specifically, Saba Capital was the largest shareholder of General American Investors, Inc. (NYSE:GAM), with a stake worth $12.7 million reported as of the end of December. Trailing Saba Capital was Bulldog Investors, which amassed a stake valued at $10.7 million. Levin Capital Strategies, Weiss Asset Management, and GRT Capital Partners were also very fond of the stock, giving the stock large weights in their portfolios.

As industrywide interest jumped, key hedge funds have been driving this bullishness. Weiss Asset Management, managed by Andrew Weiss, established the most outsized position in General American Investors, Inc. (NYSE:GAM). Weiss Asset Management had $0.5 million invested in the company at the end of the quarter. Ron Mass’s Almitas Capital also initiated a $0.5 million position during the quarter.

As you can see these stocks had an average of 15.5 hedge funds with bullish positions and the average amount invested in these stocks was $89 million. That figure was $25 million in GAM’s case. Malibu Boats Inc (NASDAQ:MBUU) is the most popular stock in this table. On the other hand Encore Capital Group, Inc. (NASDAQ:ECPG) is the least popular one with only 8 bullish hedge fund positions. Compared to these stocks General American Investors, Inc. (NYSE:GAM) is even less popular than ECPG. Our calculations showed that top 15 most popular stocks) among hedge funds returned 24.2% through April 22nd and outperformed the S&P 500 ETF (SPY) by more than 7 percentage points. A small number of hedge funds were also right about betting on GAM, though not to the same extent, as the stock returned 21.9% and outperformed the market as well.