Hedge fund interest in Genco Shipping & Trading Limited (NYSE:GNK) shares was flat at the end of last quarter. This is usually a negative indicator. At the end of this article we will also compare GNK to other stocks including MiX Telematics Limited (NYSE:MIXT), Oppenheimer Holdings Inc. (NYSE:OPY), and Greenlane Holdings, Inc. (NASDAQ:GNLN) to get a better sense of its popularity. 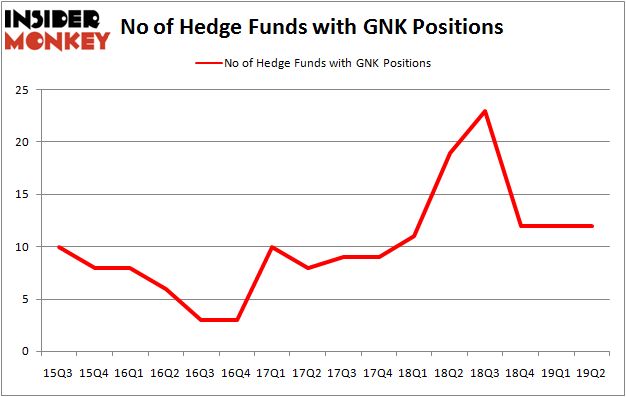 In addition to following the biggest hedge funds for investment ideas, we also share stock pitches from conferences, investor letters and other sources  like this one where the fund manager is talking about two under the radar 1000% return potential stocks: first one in internet infrastructure and the second in the heart of advertising market. We use hedge fund buy/sell signals to determine whether to conduct in-depth analysis of these stock ideas which take days. We’re going to check out the recent hedge fund action surrounding Genco Shipping & Trading Limited (NYSE:GNK).

Heading into the third quarter of 2019, a total of 12 of the hedge funds tracked by Insider Monkey held long positions in this stock, a change of 0% from one quarter earlier. The graph below displays the number of hedge funds with bullish position in GNK over the last 16 quarters. So, let’s check out which hedge funds were among the top holders of the stock and which hedge funds were making big moves.

Among these funds, Centerbridge Partners held the most valuable stake in Genco Shipping & Trading Limited (NYSE:GNK), which was worth $88.5 million at the end of the second quarter. On the second spot was Strategic Value Partners which amassed $85.8 million worth of shares. Moreover, Mangrove Partners, Renaissance Technologies, and 683 Capital Partners were also bullish on Genco Shipping & Trading Limited (NYSE:GNK), allocating a large percentage of their portfolios to this stock.

As you can see these stocks had an average of 9.25 hedge funds with bullish positions and the average amount invested in these stocks was $49 million. That figure was $194 million in GNK’s case. Calix Inc (NYSE:CALX) is the most popular stock in this table. On the other hand Greenlane Holdings, Inc. (NASDAQ:GNLN) is the least popular one with only 6 bullish hedge fund positions. Genco Shipping & Trading Limited (NYSE:GNK) is not the most popular stock in this group but hedge fund interest is still above average. Our calculations showed that top 20 most popular stocks among hedge funds returned 24.4% in 2019 through September 30th and outperformed the S&P 500 ETF (SPY) by 4 percentage points. Hedge funds were also right about betting on GNK as the stock returned 9% during the third quarter and outperformed the market. Hedge funds were rewarded for their relative bullishness.