Is Five9 Inc (FIVN) A Good Stock To Buy?

At Insider Monkey, we pore over the filings of nearly 750 top investment firms every quarter, a process we have now completed for the latest reporting period. The data we’ve gathered as a result gives us access to a wealth of collective knowledge based on these firms’ portfolio holdings as of June 28. In this article, we will use that wealth of knowledge to determine whether or not Five9 Inc (NASDAQ:FIVN) makes for a good investment right now.

Is Five9 Inc (NASDAQ:FIVN) a buy here? Hedge funds are taking a pessimistic view. The number of long hedge fund bets retreated by 2 in recent months. Our calculations also showed that FIVN isn’t among the 30 most popular stocks among hedge funds (view the video below).

What does smart money think about Five9 Inc (NASDAQ:FIVN)?

At Q2’s end, a total of 23 of the hedge funds tracked by Insider Monkey were long this stock, a change of -8% from one quarter earlier. By comparison, 26 hedge funds held shares or bullish call options in FIVN a year ago. With hedgies’ positions undergoing their usual ebb and flow, there exists an “upper tier” of notable hedge fund managers who were upping their stakes substantially (or already accumulated large positions). 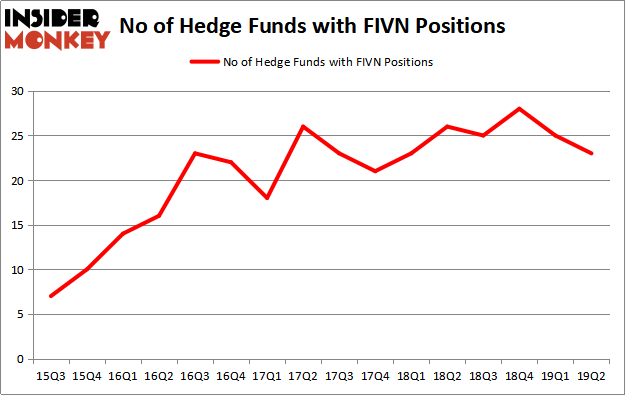 The largest stake in Five9 Inc (NASDAQ:FIVN) was held by Sylebra Capital Management, which reported holding $105.5 million worth of stock at the end of March. It was followed by Alkeon Capital Management with a $101.2 million position. Other investors bullish on the company included Tremblant Capital, Polar Capital, and Renaissance Technologies.

Judging by the fact that Five9 Inc (NASDAQ:FIVN) has witnessed declining sentiment from the entirety of the hedge funds we track, it’s easy to see that there were a few hedgies who were dropping their entire stakes in the second quarter. It’s worth mentioning that Dmitry Balyasny’s Balyasny Asset Management dumped the biggest stake of the “upper crust” of funds tracked by Insider Monkey, totaling about $2 million in stock, and Paul Tudor Jones’s Tudor Investment Corp was right behind this move, as the fund sold off about $0.9 million worth. These transactions are interesting, as total hedge fund interest was cut by 2 funds in the second quarter.

Let’s go over hedge fund activity in other stocks – not necessarily in the same industry as Five9 Inc (NASDAQ:FIVN) but similarly valued. We will take a look at Delek US Holdings, Inc. (NYSE:DK), The Ensign Group, Inc. (NASDAQ:ENSG), SINA Corp (NASDAQ:SINA), and TerraForm Power Inc (NASDAQ:TERP). This group of stocks’ market caps resemble FIVN’s market cap.

As you can see these stocks had an average of 15.75 hedge funds with bullish positions and the average amount invested in these stocks was $176 million. That figure was $479 million in FIVN’s case. SINA Corp (NASDAQ:SINA) is the most popular stock in this table. On the other hand TerraForm Power Inc (NASDAQ:TERP) is the least popular one with only 12 bullish hedge fund positions. Compared to these stocks Five9 Inc (NASDAQ:FIVN) is more popular among hedge funds. Our calculations showed that top 20 most popular stocks among hedge funds returned 24.4% in 2019 through September 30th and outperformed the S&P 500 ETF (SPY) by 4 percentage points. Hedge funds were also right about betting on FIVN, though not to the same extent, as the stock returned 4.8% during the third quarter and outperformed the market as well.