Is Fifth Third Bancorp (FITB) A Good Stock To Buy?

Hedge funds and large money managers usually invest with a focus on the long-term horizon and, therefore, short-lived dips on the charts, usually don’t make them change their opinion towards a company. This time it may be different. During the first 6 weeks of the fourth quarter we observed increased volatility and small-cap stocks underperformed the market. Hedge fund investor letters indicated that they are cutting their overall exposure, closing out some position and doubling down on others. Let’s take a look at the hedge fund sentiment towards Fifth Third Bancorp (NASDAQ:FITB) to find out whether it was one of their high conviction long-term ideas.

Fifth Third Bancorp (NASDAQ:FITB) has experienced a decrease in hedge fund sentiment lately. FITB was in 24 hedge funds’ portfolios at the end of the third quarter of 2018. There were 28 hedge funds in our database with FITB positions at the end of the previous quarter. Our calculations also showed that FITB isn’t among the 30 most popular stocks among hedge funds. 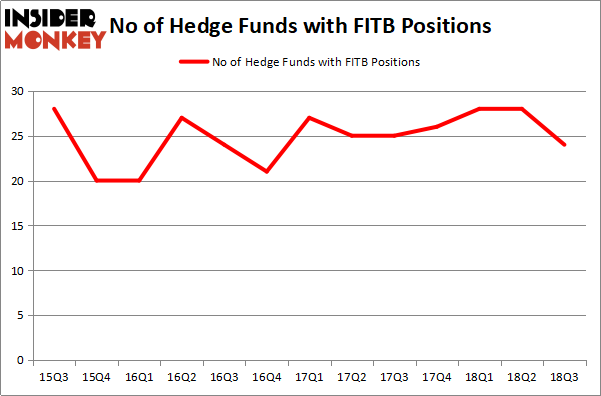 According to publicly available hedge fund and institutional investor holdings data compiled by Insider Monkey, Peter Rathjens, Bruce Clarke and John Campbell’s Arrowstreet Capital has the biggest position in Fifth Third Bancorp (NASDAQ:FITB), worth close to $118.1 million, accounting for 0.3% of its total 13F portfolio. Coming in second is Richard S. Pzena of Pzena Investment Management, with a $117 million position; the fund has 0.6% of its 13F portfolio invested in the stock. Some other professional money managers with similar optimism encompass Cliff Asness’s AQR Capital Management, Israel Englander’s Millennium Management and Gregg Moskowitz’s Interval Partners.

Due to the fact that Fifth Third Bancorp (NASDAQ:FITB) has witnessed a decline in interest from hedge fund managers, it’s safe to say that there was a specific group of hedgies that slashed their positions entirely in the third quarter. Intriguingly, Phill Gross and Robert Atchinson’s Adage Capital Management cut the largest stake of the 700 funds watched by Insider Monkey, comprising an estimated $12.9 million in stock, and Anand Parekh’s Alyeska Investment Group was right behind this move, as the fund dropped about $10.1 million worth. These bearish behaviors are interesting, as total hedge fund interest fell by 4 funds in the third quarter.

As you can see these stocks had an average of 24.75 hedge funds with bullish positions and the average amount invested in these stocks was $1.08 billion. That figure was $444 million in FITB’s case. CA, Inc. (NASDAQ:CA) is the most popular stock in this table. On the other hand WPP plc (NYSE:WPP) is the least popular one with only 8 bullish hedge fund positions. Fifth Third Bancorp (NASDAQ:FITB) is not the least popular stock in this group but hedge fund interest is still below average. This is a slightly negative signal and we’d rather spend our time researching stocks that hedge funds are piling on. In this regard CA might be a better candidate to consider a long position.