Is Fidelity Southern Corporation (LION) A Good Stock To Buy?

The Insider Monkey team has completed processing the quarterly 13F filings for the December quarter submitted by the hedge funds and other money managers included in our extensive database. Most hedge fund investors endured a torrid quarter, which certainly propelled them to adjust their equity holdings so as to maintain the desired risk profile. As a result, the relevancy of these public filings and their content is indisputable, as they may reveal numerous high-potential stocks. The following article will discuss the smart money sentiment towards Fidelity Southern Corporation (NASDAQ:LION).

Hedge fund interest in Fidelity Southern Corporation (NASDAQ:LION) shares was flat at the end of last quarter. This is usually a negative indicator. The level and the change in hedge fund popularity aren’t the only variables you need to analyze to decipher hedge funds’ perspectives. A stock may witness a boost in popularity but it may still be less popular than similarly priced stocks. That’s why at the end of this article we will examine companies such as Cellectis SA (NASDAQ:CLLS), Maxar Technologies Ltd. (NYSE:MAXR), and Chico’s FAS, Inc. (NYSE:CHS) to gather more data points.

What does the smart money think about Fidelity Southern Corporation (NASDAQ:LION)?

At Q4’s end, a total of 9 of the hedge funds tracked by Insider Monkey were bullish on this stock, a change of 0% from one quarter earlier. Below, you can check out the change in hedge fund sentiment towards LION over the last 14 quarters. With the smart money’s positions undergoing their usual ebb and flow, there exists an “upper tier” of key hedge fund managers who were upping their stakes meaningfully (or already accumulated large positions). 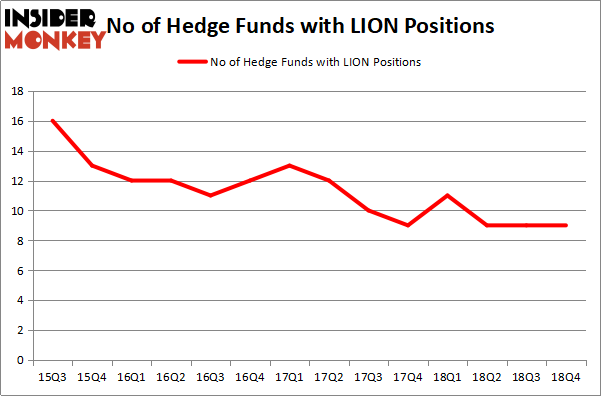 According to publicly available hedge fund and institutional investor holdings data compiled by Insider Monkey, Castine Capital Management, managed by Paul Magidson, Jonathan Cohen. And Ostrom Enders, holds the most valuable position in Fidelity Southern Corporation (NASDAQ:LION). Castine Capital Management has a $24.4 million position in the stock, comprising 8.4% of its 13F portfolio. Sitting at the No. 2 spot is Mendon Capital Advisors, led by Anton Schutz, holding a $22.1 million position; the fund has 2.6% of its 13F portfolio invested in the stock. Remaining peers that are bullish include Jim Simons’s Renaissance Technologies, Cliff Asness’s AQR Capital Management and D. E. Shaw’s D E Shaw.

Due to the fact that Fidelity Southern Corporation (NASDAQ:LION) has witnessed bearish sentiment from the aggregate hedge fund industry, it’s safe to say that there lies a certain “tier” of funds who were dropping their positions entirely in the third quarter. Interestingly, Ken Griffin’s Citadel Investment Group dropped the biggest stake of the 700 funds watched by Insider Monkey, valued at an estimated $1 million in stock. Roger Ibbotson’s fund, Zebra Capital Management, also dumped its stock, about $0.2 million worth. These transactions are important to note, as aggregate hedge fund interest stayed the same (this is a bearish signal in our experience).

As you can see these stocks had an average of 9 hedge funds with bullish positions and the average amount invested in these stocks was $29 million. That figure was $58 million in LION’s case. Chico’s FAS, Inc. (NYSE:CHS) is the most popular stock in this table. On the other hand Allegiance Bancshares, Inc. (NASDAQ:ABTX) is the least popular one with only 6 bullish hedge fund positions. Fidelity Southern Corporation (NASDAQ:LION) is not the least popular stock in this group but hedge fund interest is still below average. This is a slightly negative signal and we’d rather spend our time researching stocks that hedge funds are piling on. Our calculations showed that top 15 most popular stocks) among hedge funds returned 24.2% through April 22nd and outperformed the S&P 500 ETF (SPY) by more than 7 percentage points. Unfortunately LION wasn’t nearly as popular as these 15 stock (hedge fund sentiment was quite bearish); LION investors were disappointed as the stock returned 7.1% and underperformed the market. If you are interested in investing in large cap stocks with huge upside potential, you should check out the top 15 most popular stocks) among hedge funds as 13 of these stocks already outperformed the market this year.