Is FB Financial Corporation (FBK) A Good Stock To Buy?

FB Financial Corporation (NYSE:FBK) has seen a decrease in hedge fund sentiment lately. Our calculations also showed that FBK isn’t among the 30 most popular stocks among hedge funds (see the video below).

Unlike former hedge manager, Dr. Steve Sjuggerud, who is convinced Dow will soar past 40000, our long-short investment strategy doesn’t rely on bull markets to deliver double digit returns. We only rely on hedge fund buy/sell signals. We’re going to take a look at the recent hedge fund action regarding FB Financial Corporation (NYSE:FBK).

What have hedge funds been doing with FB Financial Corporation (NYSE:FBK)?

Heading into the third quarter of 2019, a total of 4 of the hedge funds tracked by Insider Monkey held long positions in this stock, a change of -20% from the first quarter of 2019. The graph below displays the number of hedge funds with bullish position in FBK over the last 16 quarters. With hedge funds’ sentiment swirling, there exists an “upper tier” of noteworthy hedge fund managers who were adding to their stakes considerably (or already accumulated large positions). 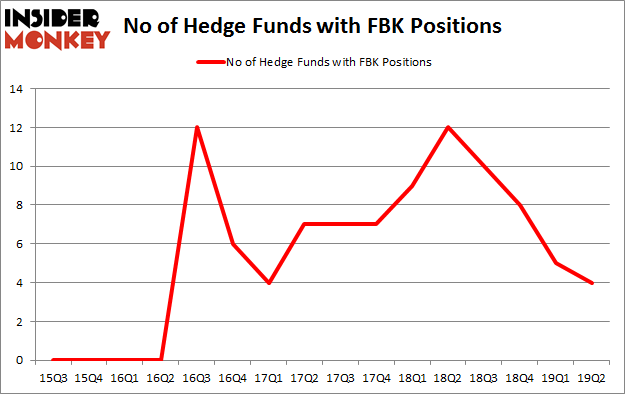 According to Insider Monkey’s hedge fund database, Anton Schutz’s Mendon Capital Advisors has the biggest position in FB Financial Corporation (NYSE:FBK), worth close to $55.3 million, amounting to 8.7% of its total 13F portfolio. On Mendon Capital Advisors’s heels is Cardinal Capital, led by Amy Minella, holding a $30.2 million position; 1% of its 13F portfolio is allocated to the company. Some other hedge funds and institutional investors that hold long positions include Renaissance Technologies, Ken Griffin’s Citadel Investment Group and .

We view hedge fund activity in the stock unfavorable, but in this case there was only a single hedge fund selling its entire position: Forest Hill Capital. One hedge fund selling its entire position doesn’t always imply a bearish intent. Theoretically a hedge fund may decide to sell a promising position in order to invest the proceeds in a more promising idea. However, we don’t think this is the case in this case because none of the 750+ hedge funds tracked by Insider Monkey identified FBK as a viable investment and initiated a position in the stock.

As you can see these stocks had an average of 13.5 hedge funds with bullish positions and the average amount invested in these stocks was $100 million. That figure was $89 million in FBK’s case. Wesco Aircraft Holdings Inc (NYSE:WAIR) is the most popular stock in this table. On the other hand Teekay LNG Partners L.P. (NYSE:TGP) is the least popular one with only 9 bullish hedge fund positions. Compared to these stocks FB Financial Corporation (NYSE:FBK) is even less popular than TGP. Our calculations showed that top 20 most popular stocks among hedge funds returned 24.4% in 2019 through September 30th and outperformed the S&P 500 ETF (SPY) by 4 percentage points. A small number of hedge funds were also right about betting on FBK, though not to the same extent, as the stock returned 2.8% during the third quarter and outperformed the market as well.