After several tireless days we have finished crunching the numbers from nearly 750 13F filings issued by the elite hedge funds and other investment firms that we track at Insider Monkey, which disclosed those firms’ equity portfolios as of December 31. The results of that effort will be put on display in this article, as we share valuable insight into the smart money sentiment towards F.N.B. Corp (NYSE:FNB).

F.N.B. Corp (NYSE:FNB) has experienced an increase in hedge fund interest of late. FNB was in 20 hedge funds’ portfolios at the end of December. There were 12 hedge funds in our database with FNB positions at the end of the previous quarter. Our calculations also showed that fnb isn’t among the 30 most popular stocks among hedge funds.

What does the smart money think about F.N.B. Corp (NYSE:FNB)?

At the end of the fourth quarter, a total of 20 of the hedge funds tracked by Insider Monkey were bullish on this stock, a change of 67% from one quarter earlier. The graph below displays the number of hedge funds with bullish position in FNB over the last 14 quarters. With the smart money’s capital changing hands, there exists a select group of notable hedge fund managers who were adding to their stakes significantly (or already accumulated large positions). 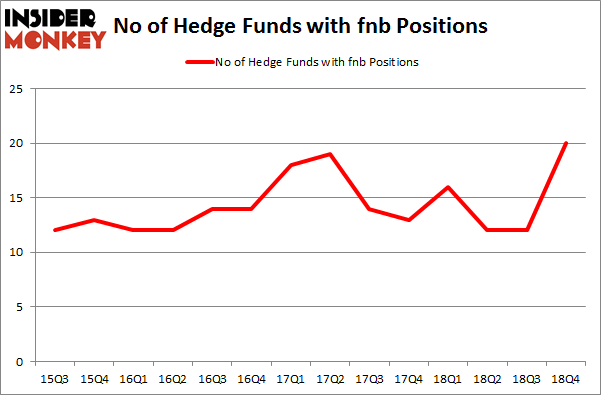 More specifically, EJF Capital was the largest shareholder of F.N.B. Corp (NYSE:FNB), with a stake worth $25.4 million reported as of the end of September. Trailing EJF Capital was Basswood Capital, which amassed a stake valued at $18.5 million. Arrowstreet Capital, Renaissance Technologies, and GLG Partners were also very fond of the stock, giving the stock large weights in their portfolios.