Is Express, Inc. (EXPR) A Good Stock To Buy?

The 700+ hedge funds and famous money managers tracked by Insider Monkey have already compiled and submitted their 13F filings for the first quarter, which unveil their equity positions as of March 31. We went through these filings, fixed typos and other more significant errors and identified the changes in hedge fund portfolios. Our extensive review of these public filings is finally over, so this article is set to reveal the smart money sentiment towards Express, Inc. (NYSE:EXPR).

Is Express, Inc. (NYSE:EXPR) a buy, sell, or hold? Money managers are taking a pessimistic view. The number of bullish hedge fund positions retreated by 3 in recent months. Our calculations also showed that expr isn’t among the 30 most popular stocks among hedge funds. EXPR was in 14 hedge funds’ portfolios at the end of the first quarter of 2019. There were 17 hedge funds in our database with EXPR holdings at the end of the previous quarter. 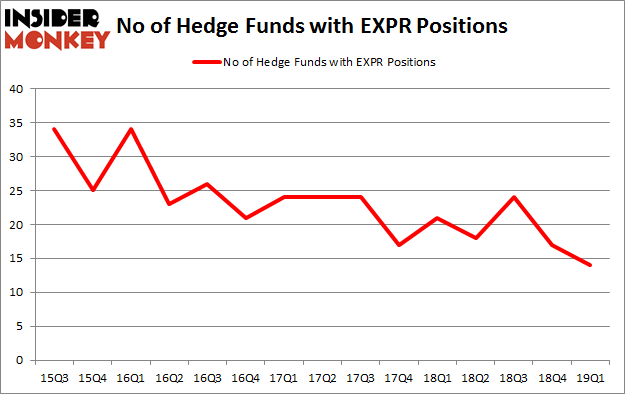 More specifically, Arrowstreet Capital was the largest shareholder of Express, Inc. (NYSE:EXPR), with a stake worth $11 million reported as of the end of March. Trailing Arrowstreet Capital was Renaissance Technologies, which amassed a stake valued at $6.1 million. AQR Capital Management, D E Shaw, and Divisar Capital were also very fond of the stock, giving the stock large weights in their portfolios.

Seeing as Express, Inc. (NYSE:EXPR) has faced bearish sentiment from the aggregate hedge fund industry, it’s easy to see that there lies a certain “tier” of money managers that decided to sell off their entire stakes by the end of the third quarter. Intriguingly, Joseph A. Jolson’s Harvest Capital Strategies cut the largest stake of the “upper crust” of funds tracked by Insider Monkey, comprising about $14.6 million in stock, and Brian C. Freckmann’s Lyon Street Capital was right behind this move, as the fund sold off about $1.5 million worth. These transactions are important to note, as aggregate hedge fund interest was cut by 3 funds by the end of the third quarter.