Is Exelon Corporation (EXC) A Good Stock To Buy?

Is Exelon Corporation (NYSE:EXC) a good investment right now? We check hedge fund and billionaire investor sentiment before delving into hours of research. Hedge funds spend millions of dollars on Ivy League graduates, expert networks, and get tips from investment bankers and industry insiders. Sure they sometimes fail miserably but historically their consensus stock picks outperformed the market after adjusting for known risk factors.

Exelon Corporation (NYSE:EXC) shares haven’t seen a lot of action during the third quarter. Overall, hedge fund sentiment was unchanged. The stock was in 33 hedge funds’ portfolios at the end of the fourth quarter of 2018. At the end of this article we will also compare EXC to other stocks including Orange (NYSE:ORAN), Intercontinental Exchange Inc (NYSE:ICE), and HCA Healthcare Inc (NYSE:HCA) to get a better sense of its popularity.

How have hedgies been trading Exelon Corporation (NYSE:EXC)? 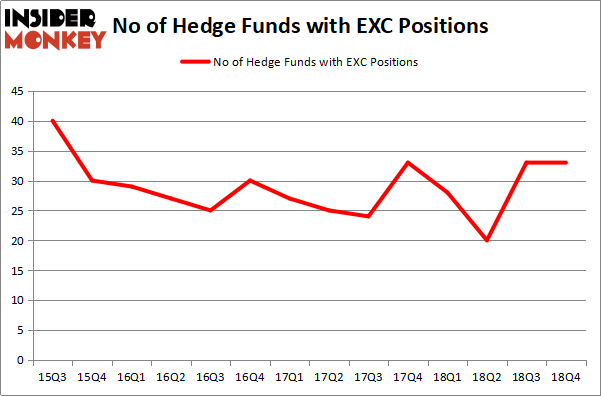 More specifically, AQR Capital Management was the largest shareholder of Exelon Corporation (NYSE:EXC), with a stake worth $801.5 million reported as of the end of September. Trailing AQR Capital Management was GLG Partners, which amassed a stake valued at $269.4 million. Renaissance Technologies, Balyasny Asset Management, and Citadel Investment Group were also very fond of the stock, giving the stock large weights in their portfolios.

Seeing as Exelon Corporation (NYSE:EXC) has witnessed falling interest from the aggregate hedge fund industry, logic holds that there exists a select few fund managers that slashed their positions entirely heading into Q3. Intriguingly, Stuart J. Zimmer’s Zimmer Partners cut the biggest investment of the 700 funds watched by Insider Monkey, comprising about $69.5 million in stock. Bernard Lambilliotte’s fund, Ecofin Ltd, also dropped its stock, about $17.9 million worth. These bearish behaviors are intriguing to say the least, as aggregate hedge fund interest stayed the same (this is a bearish signal in our experience).

Let’s now take a look at hedge fund activity in other stocks – not necessarily in the same industry as Exelon Corporation (NYSE:EXC) but similarly valued. We will take a look at Orange S.A. (NYSE:ORAN), Intercontinental Exchange Inc (NYSE:ICE), HCA Healthcare Inc (NYSE:HCA), and S&P Global Inc. (NYSE:SPGI). This group of stocks’ market caps are similar to EXC’s market cap.

As you can see these stocks had an average of 38.25 hedge funds with bullish positions and the average amount invested in these stocks was $2080 million. That figure was $2059 million in EXC’s case. HCA Healthcare Inc (NYSE:HCA) is the most popular stock in this table. On the other hand Orange S.A. (NYSE:ORAN) is the least popular one with only 2 bullish hedge fund positions. Exelon Corporation (NYSE:EXC) is not the least popular stock in this group but hedge fund interest is still below average. This is a slightly negative signal and we’d rather spend our time researching stocks that hedge funds are piling on. Our calculations showed that top 15 most popular stocks among hedge funds returned 19.7% through March 15th and outperformed the S&P 500 ETF (SPY) by 6.6 percentage points. Unfortunately EXC wasn’t in this group. Hedge funds that bet on EXC were disappointed as the stock returned 11.7% and underperformed the market. If you are interested in investing in large cap stocks, you should check out the top 15 hedge fund stocks as 13 of these outperformed the market.