Is Eversource Energy (ES) Going to Burn These Hedge Funds?

While the market driven by short-term sentiment influenced by the accomodative interest rate environment in the US, increasing oil prices and deteriorating expectations towards the resolution of the trade war with China, many smart money investors kept their cautious approach regarding the current bull run in the third quarter and hedging or reducing many of their long positions. Some fund managers are betting on Dow hitting 40,000 to generate strong returns. However, as we know, big investors usually buy stocks with strong fundamentals that can deliver gains both in bull and bear markets, which is why we believe we can profit from imitating them. In this article, we are going to take a look at the smart money sentiment surrounding Eversource Energy (NYSE:ES).

Is Eversource Energy (NYSE:ES) a great investment right now? The smart money is getting less bullish. The number of long hedge fund bets fell by 2 in recent months. Our calculations also showed that ES isn’t among the 30 most popular stocks among hedge funds (click for Q3 rankings and see the video below for Q2 rankings). ES was in 19 hedge funds’ portfolios at the end of September. There were 21 hedge funds in our database with ES positions at the end of the previous quarter.

Unlike the largest US hedge funds that are convinced Dow will soar past 40,000 or the world’s most bearish hedge fund that’s more convinced than ever that a crash is coming, our long-short investment strategy doesn’t rely on bull or bear markets to deliver double digit returns. We only rely on the best performing hedge funds‘ buy/sell signals. We’re going to take a glance at the fresh hedge fund action encompassing Eversource Energy (NYSE:ES).

How have hedgies been trading Eversource Energy (NYSE:ES)? 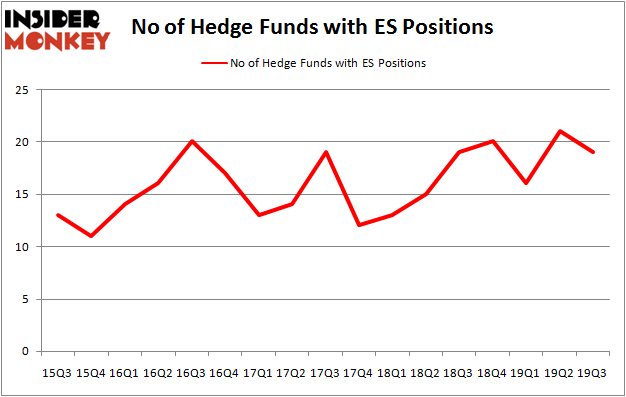 When looking at the institutional investors followed by Insider Monkey, Stuart J. Zimmer’s Zimmer Partners has the largest position in Eversource Energy (NYSE:ES), worth close to $355.5 million, corresponding to 3.9% of its total 13F portfolio. Sitting at the No. 2 spot is Renaissance Technologies, with a $158.4 million position; 0.1% of its 13F portfolio is allocated to the stock. Remaining hedge funds and institutional investors that hold long positions encompass Cliff Asness’s AQR Capital Management, Phill Gross and Robert Atchinson’s Adage Capital Management and Clint Carlson’s Carlson Capital. In terms of the portfolio weights assigned to each position Shelter Harbor Advisors allocated the biggest weight to Eversource Energy (NYSE:ES), around 7.55% of its 13F portfolio. Zimmer Partners is also relatively very bullish on the stock, earmarking 3.87 percent of its 13F equity portfolio to ES.

Judging by the fact that Eversource Energy (NYSE:ES) has experienced a decline in interest from the aggregate hedge fund industry, it’s easy to see that there were a few hedge funds that elected to cut their entire stakes in the third quarter. Interestingly, Jonathan Barrett and Paul Segal’s Luminus Management dropped the biggest position of the 750 funds watched by Insider Monkey, totaling close to $29.6 million in stock. Michael Gelband’s fund, ExodusPoint Capital, also sold off its stock, about $23.6 million worth. These moves are important to note, as aggregate hedge fund interest fell by 2 funds in the third quarter.

Let’s go over hedge fund activity in other stocks similar to Eversource Energy (NYSE:ES). We will take a look at Mercadolibre Inc (NASDAQ:MELI), CRH PLC (NYSE:CRH), SBA Communications Corporation (NASDAQ:SBAC), and Ventas, Inc. (NYSE:VTR). All of these stocks’ market caps are similar to ES’s market cap.

As you can see these stocks had an average of 26.25 hedge funds with bullish positions and the average amount invested in these stocks was $1294 million. That figure was $739 million in ES’s case. Mercadolibre Inc (NASDAQ:MELI) is the most popular stock in this table. On the other hand CRH PLC (NYSE:CRH) is the least popular one with only 9 bullish hedge fund positions. Eversource Energy (NYSE:ES) is not the least popular stock in this group but hedge fund interest is still below average. This is a slightly negative signal and we’d rather spend our time researching stocks that hedge funds are piling on. Our calculations showed that top 20 most popular stocks among hedge funds returned 37.4% in 2019 through the end of November and outperformed the S&P 500 ETF (SPY) by 9.9 percentage points. Unfortunately ES wasn’t nearly as popular as these 20 stocks (hedge fund sentiment was quite bearish); ES investors were disappointed as the stock returned -3.3% during the first two months of the fourth quarter and underperformed the market. If you are interested in investing in large cap stocks with huge upside potential, you should check out the top 20 most popular stocks among hedge funds as 70 percent of these stocks already outperformed the market in Q4.