Is Evercore Inc. (EVR) A Good Stock To Buy?

At the end of February we announced the arrival of the first US recession since 2009 and we predicted that the market will decline by at least 20% in (Recession is Imminent: We Need A Travel Ban NOW). In these volatile markets we scrutinize hedge fund filings to get a reading on which direction each stock might be going. In this article, we will take a closer look at hedge fund sentiment towards Evercore Inc. (NYSE:EVR).

Evercore Inc. (NYSE:EVR) has seen a decrease in support from the world’s most elite money managers in recent months. Our calculations also showed that EVR isn’t among the 30 most popular stocks among hedge funds (click for Q1 rankings and see the video for a quick look at the top 5 stocks).

At Insider Monkey we leave no stone unturned when looking for the next great investment idea. For example, 2020’s unprecedented market conditions provide us with the highest number of trading opportunities in a decade. So we are checking out trades like this one as well as this tiny lithium play. We read hedge fund investor letters and listen to stock pitches at hedge fund conferences. Our best call in 2020 was shorting the market when the S&P 500 was trading at 3150 after realizing the coronavirus pandemic’s significance before most investors. With all of this in mind let’s review the key hedge fund action regarding Evercore Inc. (NYSE:EVR).

At the end of the first quarter, a total of 29 of the hedge funds tracked by Insider Monkey were bullish on this stock, a change of -9% from the previous quarter. Below, you can check out the change in hedge fund sentiment towards EVR over the last 18 quarters. So, let’s see which hedge funds were among the top holders of the stock and which hedge funds were making big moves. 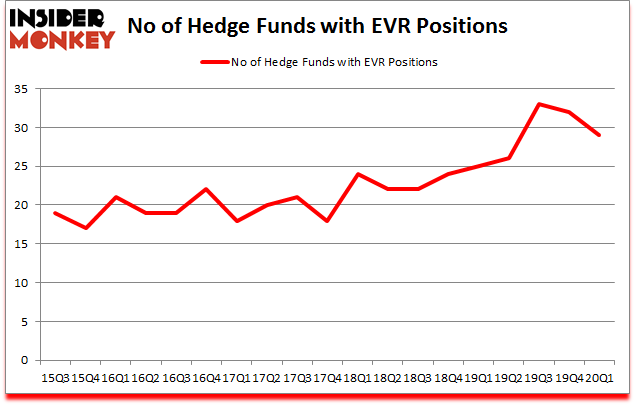 Judging by the fact that Evercore Inc. (NYSE:EVR) has witnessed declining sentiment from the aggregate hedge fund industry, we can see that there lies a certain “tier” of hedgies who were dropping their positions entirely in the first quarter. At the top of the heap, Donald Sussman’s Paloma Partners said goodbye to the largest stake of the 750 funds followed by Insider Monkey, totaling close to $1.6 million in stock, and Michael Gelband’s ExodusPoint Capital was right behind this move, as the fund cut about $0.9 million worth. These bearish behaviors are interesting, as total hedge fund interest dropped by 3 funds in the first quarter.

As you can see these stocks had an average of 18.25 hedge funds with bullish positions and the average amount invested in these stocks was $126 million. That figure was $198 million in EVR’s case. Liberty Latin America Ltd. (NASDAQ:LILAK) is the most popular stock in this table. On the other hand Triton International Limited (NYSE:TRTN) is the least popular one with only 12 bullish hedge fund positions. Compared to these stocks Evercore Inc. (NYSE:EVR) is more popular among hedge funds. Our calculations showed that top 10 most popular stocks among hedge funds returned 41.4% in 2019 and outperformed the S&P 500 ETF (SPY) by 10.1 percentage points. These stocks gained 8.3% in 2020 through the end of May but still managed to beat the market by 13.2 percentage points. Hedge funds were also right about betting on EVR, though not to the same extent, as the stock returned 20.8% in Q2 (through the end of May) and outperformed the market as well.